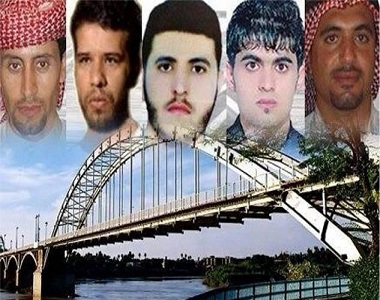 HRANA News Agency – Despite the families of 5 Arab political prisoners who are sentenced to death are following their case in a continuous way, they have got no answer from the court.
According to a report by Human Rights Activists News Agency (HRANA), when the families went to the second branch of the revolutionary court of Ahwaz the authorities told them the intelligence ministry is deciding about them.
They also said no time for the execution.
A source in Khuzestan Justice had already told HRANA that with the confirmation of Amoli Larijani and the judge of this case these political prisoners will be hanged next week.
Hashem Shabani Nejad, the poet, blogger, Arab literature teacher and Political since M.A. student of Chamran university of Ahwaz, Mohammad Ali Amuri Nejad, the student activist, former member of Islamic association of Isfahan industrial university and blogger, Hadi Rashedi, chemistry teacher with two others, Jaber and Mokhtar Alboshuke, are the 5 prisoners who have been sentenced to death on July 7, 2012 charged with, enmity with the God, propaganda against the government and action against national security in the second branch of the revolutionary court of Ahwaz.
These five had been arrested in their houses in Khalaf Abad of Khuzestan province in 2005.