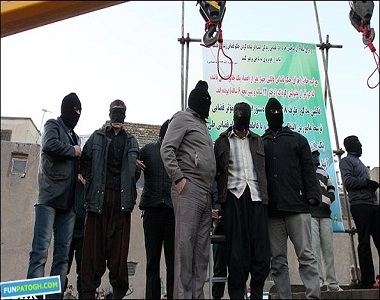 HRANA News Agency – The prosecutor of Qazvin says 3 prisoners have been hanged on charge of drug trafficking and 2 other on charge of murder.

According to the announcement of the judiciary of Qazvin province, Esmail Sadeghi Niaraki, the prosecutor of Qazvin said: “Reza, 49 years old, married, from Gilan, had been arrested in 2011 having 390 grams Krack and was sentenced to death after the legal procedure.”

About the second person he said: “Also the other guy was Rasul, 39 years old, married and from East Azerbaijan who had 990 grams Krack when he had been arrested.”

Sadeghi continued: “The third person was Ali and from West Azerbaijan. He had 976 grams Krack and was tried in West Azerbaijan but because of some concerns he is hanged here in Qazvin.”

About the two others he said: “Habib, 40 years old and Mehdi, 30 years old have been hanged according to the sentences of the second branch of the criminal court of Qazvin and in the presence of the families of the slains.”

“Habib was claiming to have magic powers and got connected to 3 of slains through this and then killed them for unknown reasons.”

40 thoughts on “5 prisoners have been hanged in Qazvin”