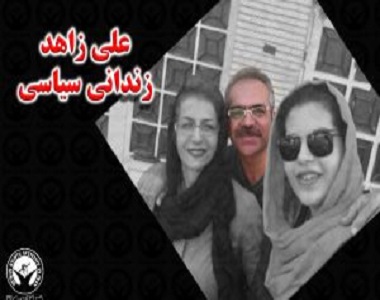 HRANA News Agency – Ali Zahed, political prisoner at Ward 350 in Evin Prison, has been kept in limbo for more than a year, after his life imprisonment sentence was broken. His case has been referred to Branch 15 of the Revolutionary Court, however, there is still no information on determining the date and time for the case in order to be treated.
According to the report of Human Rights Activists News Agency in Iran (HRANA), the life time imprisonment sentence for Ali Zahed was revoked by Judge Razini about a year ago at the Supreme Court. His case has been referred to Branch 15 of the Revolutionary Court in Tehran a few months ago. However, there is still no indication of the timing of the trial.
Ali Zahed, political prisoner at ward 350 of Evin prison, was sentenced to death by a lower court, which was reduced to life time imprisonment at the stage of revision with a degree of rejection.
Ali Zahed’s appeal was admitted in November last year, and the sentence of life time imprisonment was rejected by Judge Razini in the Supreme Court. According to a routine judicial procedure over the past few months, his case has been referred to Branch 15 of Tehran’s Revolutionary Court, but is still awaiting the appointment of a court.
Ali Zahed, 48, is married and has a child. He was arrested by the Ministry of Intelligence in May 2008 and transferred to the Shiraz Intelligence Office and then to Evin Prison. Then he was sentenced to death in a primitive stage and then to life time imprisoned with a degree of remission.
The original reason for Mr. Zahed’s arrest was friendship with Mohsen Islamian. Mr. Islamian was born in 1989 in Shiraz. He was a student and was executed in April 2009 on charges of communicating with the Monarchy Association and participating in the bombing of Hosseiniyeh Rahpoyan in Shiraz.