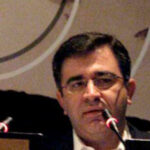 Mehdi Mo’tamedi Mehr was sentenced to five years imprisonment by branch 28 of revolutionary court on charge of membership in Iran Freedom Movement, participation in Ashoora protest and writing columns in purpose of criticizing the regime which the verdict was confirmed by appealed. END_OF_DOCUMENT_TOKEN_TO_BE_REPLACED

According to a report by Human Rights Activists News Agency (HRANA), these two cultural-literary activists arrested on charge of writing announcement in Kurdish one month ago for a Kurdish writer passing away. They were summoned and detained right after a complaint by Molla Ghader Ghaderi the envoy of Iranian supreme leader in Paveh

“The named persons issued a Kurdish announcement in a local funeral which was not included any name of Islam and sacraments. These cultural invasions will weakened Shiite Islam and Imam Khomeini’s goals”, The envoy of Ali Khameneie complaint included.

This cleric made the Etela’at repressions on cultural-political activists easier in Paveh through his speeches, intimidations and threatens in Paveh.

This happens while last week in his sermon this cleric challenged the new families way of naming their kids in Kurdish and not Islamic names and called the new generation of girls and boys with Kurdish names as depraved, strayed and SMS exchangers.

After his insulting, wave of cyber protests started on facebook and the other social networks as people believe the envoy of Ali Khameneie crossed the boundaries and interfered personal affairs.

Cleric’s supporters named the comment makers as foreign agents and west mercenaries and threatened them to remove their comments, but the opponents believe the speeches of this cleric is anti-culture and violations on human and civil rights.

END_OF_DOCUMENT_TOKEN_TO_BE_REPLACED

No news from arrested Journalist after one week

HRANA News Agency– It is more than one week without any news from Sasan Aghaie the arrested journalist who has been banned to have visitor.

Sasan Aghaie arrested by the invasion of the security forces on January 27th of 2013 at E’temad newspaper office. Since a week ago he had not exchanged any call with family and when his family tried to visit him on February 8th of 2013, the prison officials said that Sasan is banned to have visitor.

According to a report by Human Rights Activists News Agency (HRANA),  quoted from Advar News, the last call between Sasan Aghaie and his family exchanged last Monday and since that time there is no news about Sasan’s condition which worried his family too much.

HRANA News Agency – On Sunday February 3rd of 2013 the union activist Yasan Mosavi has been arrested and till now he has not contacted his family.

According to a report by Human Rights Activists News Agency (HRANA), Yasan Mousavi who is 29 years old, a union activist in Tehran market and one of active people in Mir Hossain Mousavi’s election campaign arrested at his home through security forces invasion. His parents have been hanged in 80s.

Security forces broke the door and invaded to his home, then searched all the house, took away his personal belongings such as photo camera, photo album, computer and after all arrested him.

“On Tuesday February 5th through a call from Etela’at they informed us that one month temporal detention verdict issued for Yasan and he is in Evin prison now.”, One of his relatives said to HRANA reporter.

“We have no information about his situation and his health, also the family is very concern”, His relative continued.

Yasan is the brother of Hooman Mousavi who was arrested after elections in 2009 and was in Evin prison for more than 2 years.

According to the reports by Human Rights Activists News Agency (HRANA), Fatemeh Sagharchi and Reyhaneh Tabatabaie have been arrested on January 27th and January 31st.

END_OF_DOCUMENT_TOKEN_TO_BE_REPLACED

HRANA News Agency – Etela’at ministry of Iran claimed in a statement that the arrested journalists were associated to BBC and might be another group to arrest in the next few days.

According to a report by Human Rights Activists News Agency (HRANA), quoted from ISNA, Etela’at ministry wrote in the statement “During the preparations for the Fajr anniversary this Ministry could discover one the biggest media networks associated to the arrogance media center.”

END_OF_DOCUMENT_TOKEN_TO_BE_REPLACED

HRANA News Agency – Ali Dehghan, the economic columnist arrested by  security forces on charge of connection with some subversive sides.

According to a report by Human Rights Activists News Agency (HRANA), quoted from Bulletin News, Dehghan worked with reformist newspapers such as Shargh, Bahar, E’temad, Vaghaye’ Etefaghiyeh and also ILNA News Agency in the past.

END_OF_DOCUMENT_TOKEN_TO_BE_REPLACED

The journalists are reportedly accused of cooperating with “anti-revolutionary” Persian-language media organizations outside Iran.