Girls students of Tehran university were beaten on March 8 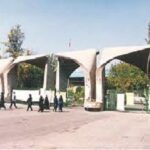 HRANA News Agency – On March 8th of 2013 some unknown men broke the windows of Chamran girls dormitory of Tehran university.

According to the report of Daneshjoonews, this happens after the protest of the students in front of the dormitory right after issuing the new rule as students are not allowed to enter the dorm after 9:30 P.M. .

END_OF_DOCUMENT_TOKEN_TO_BE_REPLACED

Master degree student has been fired from Allameh Tabatabaie university

According to a report by Human Rights Activists News Agency (HRANA), Hiwa Tasseh, the student of Allameh Tabatabaie university in a phone call informed Kurdpa news agency that “Etela’at prevented my study continuation for the second time.”

END_OF_DOCUMENT_TOKEN_TO_BE_REPLACED

Student activist, Amir Chamani resident of Tabriz has been detained

HRANA News Agency – Amir Chamani, student of master degree in sociology faculty of
Tabriz private university, has been detained by the security forces.

According to a report by Human Rights Activists News Agency (HRANA), Amir Chamani, student activist, at 04:00 PM of Sunday 13th of January has been arrested by the security forces at his home.

END_OF_DOCUMENT_TOKEN_TO_BE_REPLACED

HRANA News Agency – student activist Rashid Esmaili has been arrested by security forces in Esfahan. Esmaili, an executive member of the student group Tahkim-e Vahdat, was arrested on Saturday September 8 without an arrest warrant.

According to a report by Human Rights Activists News Agency (HRANA), Esmaili was first arrested in December of 2009 while he was undergoing cancer treatment. He was banned from graduate studies in human rights at Allameh University and in recent months was involved in journalistic activities with various websites.

His mother told that Esmaili will be held by the Revolutionary Guards Security branch until his interrogation is complete.

HRANA – Masoud Kadkhodaee, a senior civil engineering student at Amir Kabir University, was arrested last week after a raid by security forces on his residence.

END_OF_DOCUMENT_TOKEN_TO_BE_REPLACED

HRANA – In the early hours of Thursday, May 27th, more than twenty armed plain-clothes agents raided the office of the Board of Trustees, the office of the Founder, and the Office for the Center of Advanced Arts and Sciences at Azad University and illegally entered the premises.

END_OF_DOCUMENT_TOKEN_TO_BE_REPLACED

Disabled Student Dies in Fire at War Exhibition in Mahshahr

HRANA – A disabled student died on Tuesday in a fire at an exhibition organized by the Student Basij at the Mahshahr campus of Azad University in commemoration of the “Liberation of Khorramshahr”.

According to information received by HRANA, the fire broke out when an electrical cable caught on fire inside the exhibition tent. Reports indicate that the fire was caused by the organizer’s failure to comply with basic safety standards; a single outlet strip of inappropriate electrical capacity was used to power multiple cooling devices and flammable materials were used for the exhibition tent. As a result, once the fire started, it spread uncontrollably and the surging flames engulfed the area at frightening speed.

Most students and individuals at the scene were able to escape but some students, like “Gholam Reza Ghanbari”, were not so lucky and lost their lives. Mr. Ghanbari, who was disabled and in a wheelchair, was unable to escape and burned in front of the helpless and traumatized survivors. Other individuals suffered from minor injuries.

Upon seeing this devastating scene, students began to protest vehemently but were severely dealt with by university security forces.

University officials have closed the university until further notice in order to control the student protests in response to this tragic event.

HRANA – Benyamin Al-Tayeb, a student at Azad University in Dezful was arrested by Ahvaz Intelligence Ministry agents on Tuesday, May 18, 2010.

This 19 year-old student is not a political activists and the arresting agents did not articulate any charges against him at the time of his arrest.

According to Norouz, it appears that Mr. Al-Tayeb’s was arrested because of his family’s record. Unfortunately, the site did not provide any further information about the family’s history with the government.

HRANA – At least 15 students arrested after a protest at Payam-e-Nur University in Marivan on Thursday, May 13, 2010.

In this protest, students were asking the people of Marivan to participate in a city wide strike to show their dismay of the executions that had occurred earlier this year. Those arrested at this event have been sent to undisclosed locations.

According to the information received by HRANA, here are the list of 5 of those who were arrested:

Central Intelligence Agency of Marivan during the past few days has contacted many of the activist of that city and has threatened them that should they follow through with promoting strike, they will face severe consequences.

Currently the atmosphere of Marivan is that of domination by anti riot and security forces.