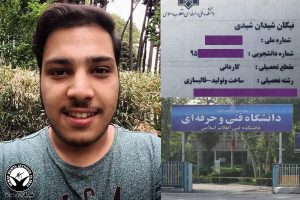 An informed source told HRANA that Shidi was unceremoniously summoned at the end of his third term and asked, given his professed religion, “why he had registered at the university at all.”

“He was told that the university was no place for Baha’is and that the three terms he had spent there was three terms too many. They told him to change his professed religion at the registrar’s office if he wanted to carry on with his studies.”

According to the source, when Shaydan Shidi refused to do so, the security office summoned his father, but the two were unable to gain ground in negotiations with university officials. “No matter how hard [they] tried–writing letters to the education office of the university and visiting the dean–the university wouldn’t give him the necessary credentials to take his final exams. In the end, he was expelled.”

While Iranian Baha’is are routinely banned from pursuing higher education, some manage to surpass initial barriers to enrollment, only to be thwarted before culminating their degree. On September 15th, HRANA reported on the expulsion of Baha’i architectural design student Shaqayeq Zabihi Amrii from Rassam Private University of Karaj.

Baha’i students are often prevented from enrolling in college altogether during the processing of their results on the nationally-competitive college entrance exam known as “Concours.” Over the past few weeks, more than 51 Baha’i students were stopped short of applying to universities, purportedly due to “deficiencies” in their admissions files. In its close coverage of these most recent cases, HRANA published specimens of the documentation used to block these Baha’i student files from further processing.