A number of retirees of the airline company Homa assembled before Mehrabad Airport Central Office Building in Tehran. They also protested against the merger of Homa’s pension fund into the national pension fund.

“We have not yet fully earned the salary for September.” one of the protestors stated. “The retirees of Tehran have received 5 million tomans of the payment but the rest of the retirees have not received anything.” 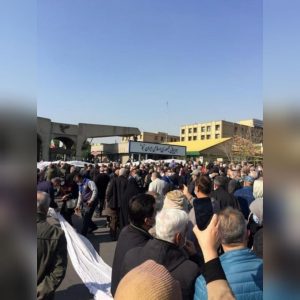 In Isfahan, a number of farmers assembled in and marched through in the dried up stretches of the river Zayandeh-rud. This is the sixth day that they have protested to demand their water portion.

A group of contracted teachers and educators working in Neyshabur City protested in the building of the General Department of Education of Razavi Khorasan Province in Mashhad. 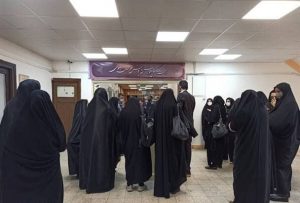 A group of residents in a district in Izeh County in Khuzestan Province assembled in front of the government building to demand their rights. They claimed that a portion of their land has been confiscated by the Department of Natural Resources. 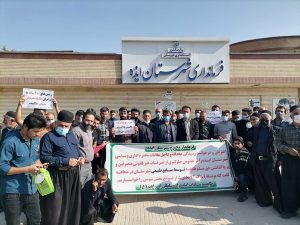 A group of syndicate bus drivers of Tehran Bus Company assembled before the building of Government Employees’ Court and then marched towards the Judiciary Office in Tehran. As one of the protestors mentioned, they protested against delays in payment, not receiving uniforms and contractors who are shirking their responsibilities towards addressing workers’ issues.

Personnel of at least nine medical centers, belonging to the University of Medical Sciences and Health Services, assembled and protested against authorities’ failure to follow through on promises they have made. 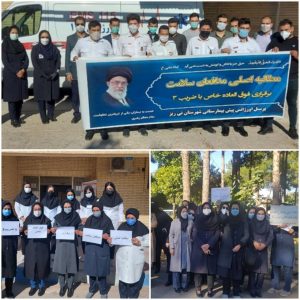 Retirees of the Ministry of Agriculture Jihad assembled before the office of the President to demand that their housing issues be addressed. Reportedly, several years ago, they made down payments on apartments from a housing cooperative and then were never granted building permits.

A number of contracted teachers assembled in front of the government building in Qazvin City to protest against modifications in job contracts and irregular payments. Reportedly, these teachers primary complaints relate to the arbitrary determination of salaries. They stated that their monthly salary is just about 1.8 million tomans, which falls below the poverty line. 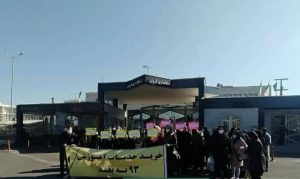 A number of retirees of the pension fund of Fulad Company assembled in front of the pension fund offices of various cities. They asked for the fortification of their pension to surpass the poverty line, closing the disparity in pension incomes, enforcing Article 96 of the Social Security Act, solving issues regarding supplementary insurance. 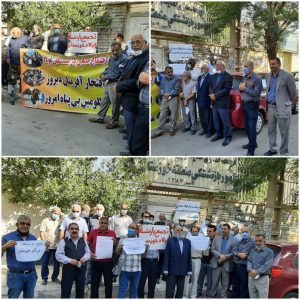 A group of sugarcane harvesting workers of Haft-Tappeh Company assembled and protested at the company premises. 150 fired sugarcane workers demanded to be hired again and work in other parts of the company.

Contracted service workers of Ahvaz Municipality assembled before the governorate building to ask to be recruited by the municipality rather than contractors.

For a seventh consecutive days, a group of farmers assembled in Isfahan and marched through the dried up stretches of the river Zayandeh-rud to demand their water portion. They spent the night in tents under the Khaju Bridge.

A number of Taxi drivers assembled and protested before the City Council Office in Kahnooj City in Kerman Province to protest against the newly announced fare rates. They said that they can hardly afford their living costs with such low rates.

Earthquake victims of Bandar-Abbas villages assembled to protest against neglect of their issues.

A number of workers of Sanandaj Municipality assembled in front of the City Council Building to demand their unpaid wages.

Dozens of workers of the tire manufacturing factory Barez assembled at factory premises to protest against the gap in wages and benefits.

“Many times we asked company management to do something about discrimination in wages and address our poor job conditions,” one worker said. “Considering poor economic conditions of the county, there has been no increase in our wages despite the multiplying manufactured products’ prices.” 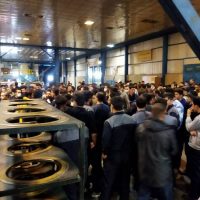 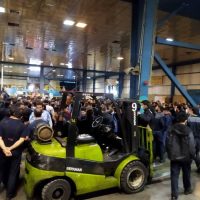 Personnel of Metro security in Karaj City went on a strike and assembled before the metro station and demanded that wage and insurance issues be addressed.

In Tabriz, for several consecutive days, the workers of the Iran Tractor Manufacturing Industrial Group went on a strike and assembled at their workplace. They protested against low wages and the lack of job security, and the failure to enact the promised changes in their contracts. 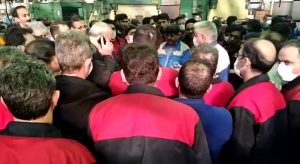 For the ninth consecutive day, farmers in Isfahan assembled and protested in the dried up stretches of the river Zayandeh-rud. They spent the night in tents under the Khaju Bridge.

A number of workers of the copper mining company “Dareh Zar Ruchun” assembled in Sirjan city.

They protested against the mismatch of working hours with wages, not implementing the Job Classification Act, low wages, the lack of job security. 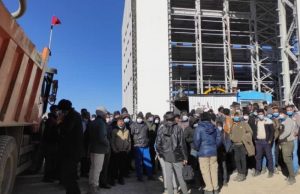 A number of workers of Railway Services & Technical Construction Engineering Company working in Metro Security assembled and blocked the railway and demanded their delayed payments. 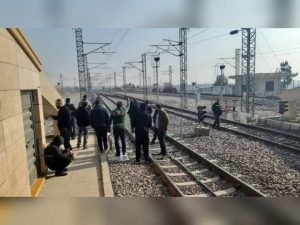 For the tenth consecutive day, farmers assembled and protested in the dried up stretches of the river Zayandeh-rud in Isfahan to ask for their water supply.