A group of ranchmen in various cities such as Shahroud, Qazvin, Isfahan, Arak, Qom, Shiraz, Yazd, Kerman and Mashhad gathered and protested before the building of the Ministry of Agriculture Jihad in each city. In Shiraz, the protestors rallied in the streets after gathering.

They chanted “livestock in Rials, the expenditures in dollars”, and “ranchmen are bankrupt.” to protest against the high prices of animal and poultry feed.

In response to a call for protest against inflation and surging prices in media, in Khuzestan Province, people in Shadegan, Susangerd and Izeh demonstrated. In this regard, in Susangerd, at least 20 people were arrested by security forces. in Izeh City, The police used tear gas to crack down on the protests.

A group of residents of the village Sheykh Taqqeh in Kurdistan Province held protests in their village against destroying farming lands for setting up factories.

They said: “Instead of using the place of Zagros Steel Company which shut it down under various pretexts, now they want to destroy farmlands to set up a factory. The closed factory location suits best this new factory. It is already equipped with gas and water and is near the railway. We are wondering why they want to build the factory on our farmlands.” 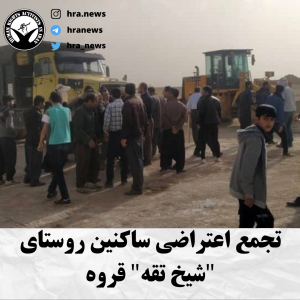 A number of staff of the contractor companies who are working for the Ministry of Energy gathered before the Administrative and Recruitment Affairs Organization in Tehran to demand official contracts with the Ministry. They argued that according to the regulations and enactments, all employees who have been recruited through passing the National recruitment exams should receive official employment contracts with government organizations of the Ministry of Energy. 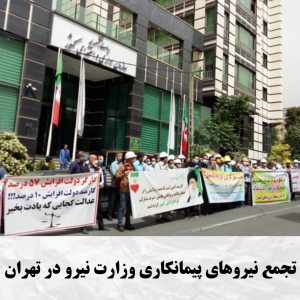 A group of workers of the Coal Mining Galanderoud in Mazandaran Province held protests before the Iranian Mining Products and Supplies Company in Tehran.

According to the protestors, the employer forces them to come under contract with the contractors rather than the company itself.

The workers of contractor companies who are working as welders in Gas Tank Manufacturing projects as well as the Electrical and instrumentation workers working for Gachsaran Petrochemical Company went on strike. They asked for unpaid wages, the end year bonuses and a work schedule of 20 days on/10 days off.

A number of retired workers of Haft-Tappeh Complex gathered before the Ministry of Cooperatives, Labour, and Social Welfare office in Shush City. They said that after one year of the employer’s failure to meet their demands, they filed a complaint to the Ministry of Labour. But the process goes through very slowly. 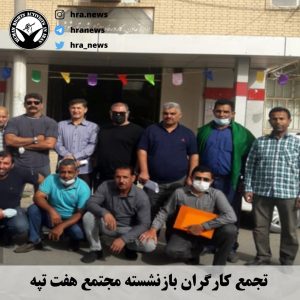 Some of their demands include raising pensions to stand above the poverty line, implementing an already enacted plan to close wage disparities, addressing supplementary insurance issues, and paying the end year bonuses. 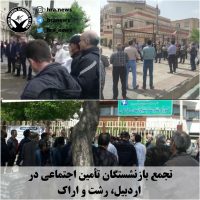 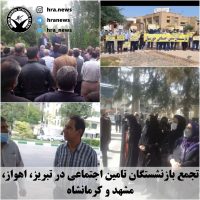 A number of workers of the Tabriz Petrochemical Company gathered before the company entrance to protest against the wage gap between the office personnel and workers.

In Mariwan, dozens of teachers and educators gathered before the Ministry of Education in support of two detained teachers Eskandar Lotfi and Masoud Nikkhah.

On May 1, 2022, security protests arrested two teachers and members of the Teachers’ Trade Association of Mariwan Eskandar Lotfi and Masoud Nikkhah. They went on hunger strike right after the arrest.

The personnel of Sepah Bank gathered in Isfahan to protest against low wages and other demands.

For the second consecutive day, the workers of the Gachsaran Petrochemical Company went on strike and gathered at work premises. They asked for unpaid wages and other benefits.

A group of Administrative staff of Ali-Nasab Hospital in Tabriz gathered at the hospital premises to ask for receiving the extra payments that had been allocated merely to medical staff during Coivd-pandemics.

The green maintenance workers of the Municipality of Shiraz gathered and protested before the City Council Building. They protested against irregularities in payments, low wages and the lack of job security. 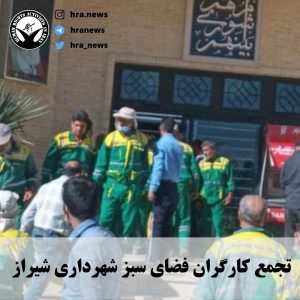 A group of the candidates for the residency exam protested to change the exam date. 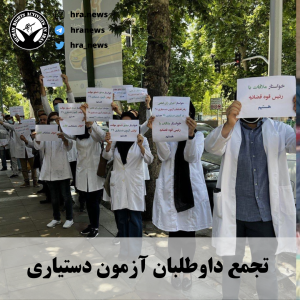 A number of mini-bus drivers in Bandar-Abbas went on strike to protest against the fuel shortage.

For the third consecutive day, the workers of Gachsaran Petrochemical Company went on strike and gathered before the headquarters of Gachsaran Oil and Gas Company. One of the protestors told HRANA: “Today in this gathering, we the workers who have temporary job contracts ask for levelling up wages adequately because this 10 per cent increase is less than the annual increase in the minimum wage.” 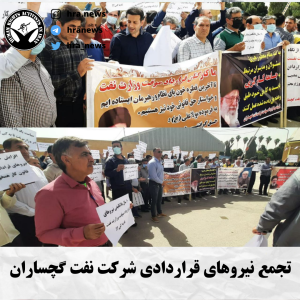 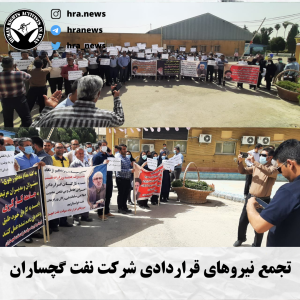 A group of shareholders of Bank Day gathered before the Central Bank in Tehran to ask for their demands. They chanted slogans for resigning the bank managers. 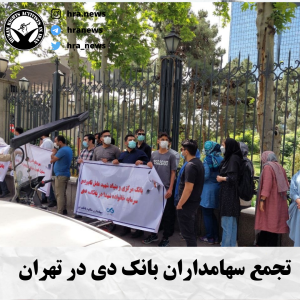 The workers of the contractors who are working for Adish Refinery Company in Kangan, Bushehr Province, joined the 1401 Campaign and went on strike. Many workers in the oil industry have recently launched a protest campaign to ask for raising wages.

A number of pharmacists assembled and protested before Food and Drug Administration in Tehran. They protested against the low wages determined by the Pharmacist Association and not holding elections for this association under the pretext of Coivd-19 pandemics for two years. 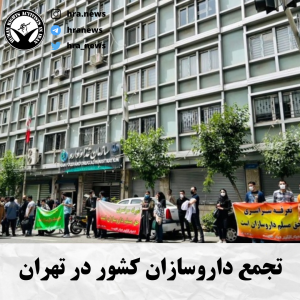 The residents of two villages in Shiraz County gathered and protested before the governorate building in Shiraz City. They protested against the poor quality and saline water caused by a salt dome along the river.  Despite frequent requests, the local authorities have done nothing to remove this salt dome. 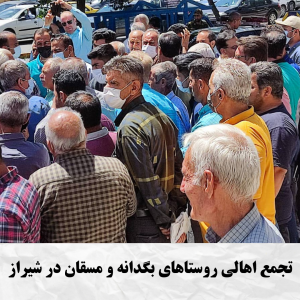 As a backlash to the new wave of inflation, citizens in several cities such as Shahrekord, Andimeshk, Izeh and Junqan poured into the streets. The police and security forces cracked down on the protests and used tear gas and live ammunition to scatter the protesting crowds. 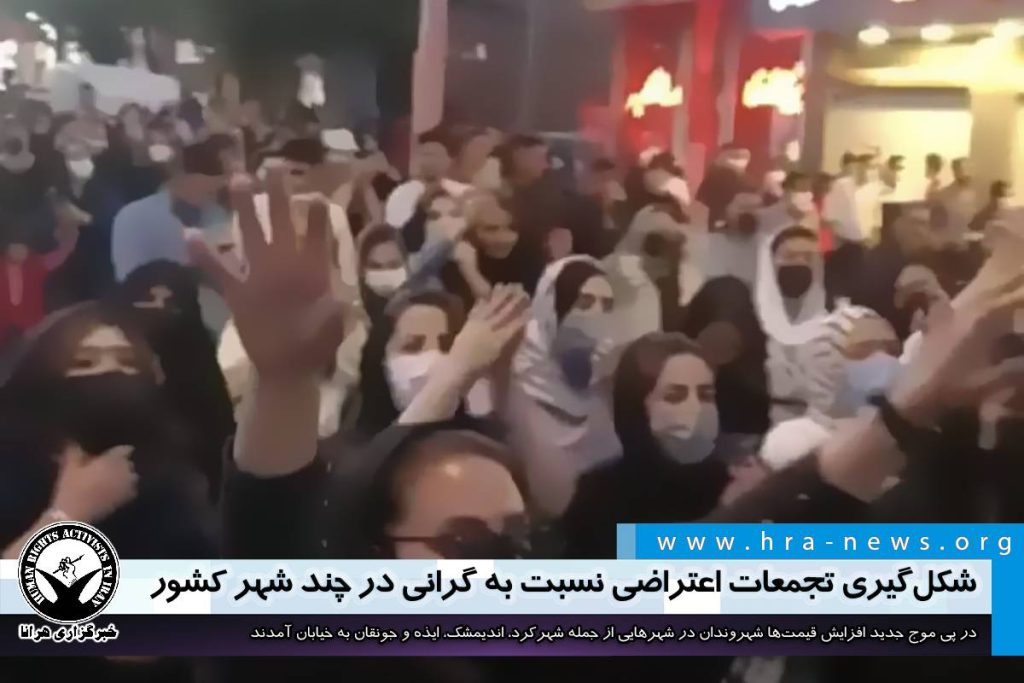 In response to the call of the Coordinating Council of Iranian teacher Unions, both retired and working teachers in dozens of cities held protests before the Ministry of Education in each city and the parliament in Tehran. The protestors chanted slogans in support of detained teachers. 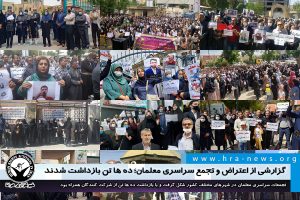