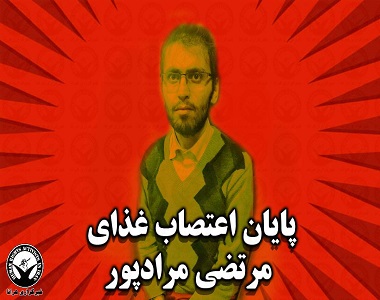 HRANA News Agency – Morteza Moradpoor, political prisoner of central prison of Tabriz, ended his hunger strike after 65 days, on the request of his mother.
According to the report of Human Rights Activists News Agency (HRANA), Morteza Moradpoor responded to a message from his mother, Masoumeh Amani who requested him to end the strike, and he ended it on the 65th day of the strike, on December 28.
Mr. Moradpoor ended his 65-day-long hunger strike by the request of his mother.
Morteza Moradpoor started his hunger strike in protest to the unfair and illegal trial process, not applying article 134 by writing a letter to head of judiciary of East Azerbaijan and announced his hunger strike.
According to article 134 of Islamic penal act, the person does not serve accumulation of sentences when multiple charges are laid, but serve the highest sentence. According to this law, and the fact that he has served more than 2 years of his sentence, he could be released.