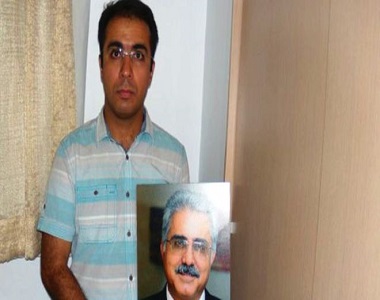 HRANA News Agency – Despite the issuance of the letter of permission for visit, the persecution office has interdicted the visit of Navid Aghdasi, Baha’i citizen, with his family.

According to the report of Human Rights Activists News Agency (HRANA), 16 Iranian Baha’i citizens were arrested in Tehran, Mashhad and Isfahan cities by the intelligence service of Iran and 16 stores were sealed, on November 15.

Among arrestees is Navid Aghdasi who has been arrested on the same day and was transferred to Evin prison. He contacted his family few hours after the arrest and informed them about his health status and asked them to follow up with branch number three of Quds court.

After that his family has been visited the court many times and requested for visiting their child and the head of the court, but the authorities responded that they had to go there again later.

He had a phone call with his family after two weeks, and according to his family, his conscientious status was weak that has made them concerned.

After this call and submitting written requests during past week, a letter has been issued by the Quds court in which a visit was set for the end of the week with Navid in branch number three of Quds court.

After their arrival in the court on Thursday on November 17, and showing the letter, they confronted with the harsh response from the authorities and they were told that not only he was banned from visits but he had been banned from telephone calls as well.

It is said that the four others Baha’i arrestees have contacted their families recently.