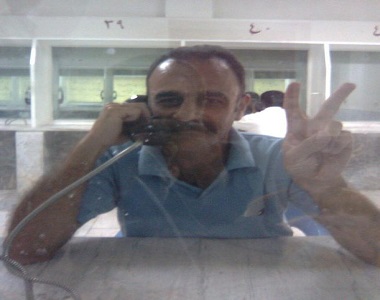 HRANA News Agency – Amir Khosro Dalir Sani has got no vacation, although he is spending the fourth year in the prison.
According to a report by Jaras website, in spite of the follow of his family and the promise given by the authorities, he is not allowed to go on a vacation and the authorities refuse to give any reasons for this.
He was prevented from meeting his family for one year and a half because of signing some statements. One judicial authority has told to his family he would better no to have any meetings but did not tell anything about the reason of this decision.
Amir Khosro Dalir Sani is a member of the “Jonbesh Moslamanan Mobarez” and the representative of the Jonbesh in the “committee to follow arbitrary arrests.” He was arrested on January 3, 2010 on the charge of “Community and conspiracy to commit crimes against national security” and sentenced to 4 years of prison.
He was one of those who went on a hunger strike with Hoda Saber, after the murder of Haleh Sahabi in January 2012.
Afterwards he wrote a letter about the details of the hunger strike and the death of Hoda Saber.
Amir Khosro Dalir Sani has once got a vacation in March 2010 for 7 days and since then is in prison.