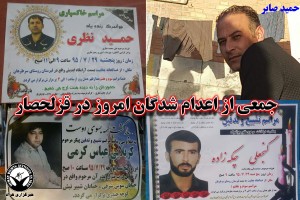 HRANA News Agency – With authentication of the identity of another inmate who was executed at Ghezelhesar prison in Karaj, the number of victims rose to 12. Lack of communication with other prisoners and families of prisoners and holding him in the ward of prisoners with mental problems, is one of the reasons for the delay in identifying the prisoner who was executed.

According to the report of Human Rights Activists News Agency in Iran (HRANA), with authentication of the identity of a prisoner who was executed, the number of executed prisoners on Wednesday, October 19 in Ghezelhesar prison in Karaj rose to 12 prisoners. This is while the judiciary and parliament members have continuously talked about their plans for reduction of execution for prisoners with drug related charges. Afshin Farajzadeh is the identity of the prisoner, which was authenticated by HRANA.

An informed source close Mr. Farajzadeh, in an interview with HRANA’s reporter, in this regard explained: “Afshin Farajzadeh was co-defendant with Peyman Sabalan and Mr. Babai who was held in ward of pill (Mental) prisoners and had no communication with other prisoners and his family. In fact, he had no family outside the prison”.

A group of 11 to 17 prisoners had been transferred to solitary confinements on Monday, October 17.

According to the received reports, at least 11 of these prisoners, who were mostly from section 2 of Ghezelhesar and Tehran’s Great prison (Fashafooyeh prison) have been executed.

The identities of 11 prisoners which have been confirmed by HRANA are as following:

Among these prisoners, Abbas Karami was the only prisoner who did not have the chance to visit his family for the last time.

The majority of executed prisoners did not have a transparent court process and the judiciary did not clarify their cases. According to field research done by HRANA, at least one of these prisoners had been deprived of a fair trial. Hamid Nazari was executed today.