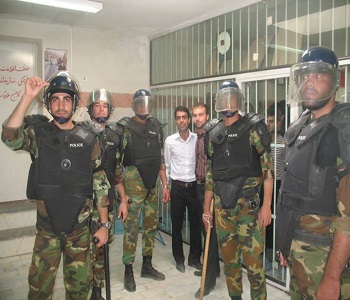 HRANA News Agency – The Special Guard of Evin prison has done a series of unusual inspecting, during recent days, in ward 7 and ward 8, each of which lasted for several hours.
According to the report of Human Rights Activists News Agency in Iran (HRANA), during the first inspection which began in the early hours of the morning on Thursday 16th July, prison guards woke up the prisoners and sent them into the hall and corridors of the wards and started inspecting prisoners’ stuff. The investigation continued until 1 am, and faced ward 8 political prisoners’ protest.
It also was reported that Reza Entesari, one of the imprisoned Dervishes, was transferred to prison clinic, because of a heart attack.
The day after that, the prison guards sent all the prisoners of ward 8 again to the ward’s yard in the heat, and proceeded to inspect their personal belongings, and due to the heat and also as some of the prisoners were fasting, in Ramadan, it caused prisoners protest.
In the last stage, Hall 12, of ward 7 in Evin prison, where, mainly is ward of political-security prisoners, was searched, and according to HRANA’s sources this inspection lasted for about 3 hours.