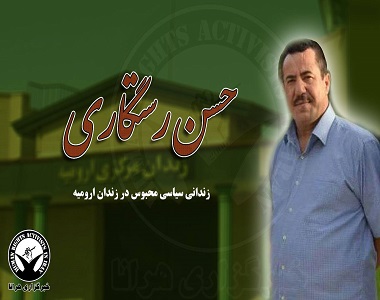 HRANA News Agency – Hassan Rastegari Majd, Iranian-Turkish citizen and political prisoner in Urmia Central Prison, who has been sentenced to 24 years in three separate cases, has an unfavorable medical condition. The prisoner who had gone on hunger strike in protest against his legal situation, accused the judicial authorities and in particular prosecutor’s office with not doing what he promised to do.
According to the report of Human Rights Activists News Agency in Iran (HRANA), Hassan Rastegari Majd has been detained since 2013 and sentenced to about 24 years in prison and lashes for three cases. In recent weeks, the prisoner has called to investigate his legal situation and his medical problems by a lot of legal correspondence and contact with the Turkish Consulate.
A source close to Hassan Rastegari Majd told HRANA’s reporter: “The political prisoner has requested to investigate his legal status through sending letters to the judicial authorities and also contacting the Turkish Consulate during recent months.”
Mr. Rastegari has protested mostly against his main case regarding the charge of membership in the P.K.K for which he has been sentenced to 15 years in prison.
The basis for issuing this verdict was “repeating the offense”, that in fact refers to the case of Mr. Rastegari in 2009, for which he had been sentenced to 2 years in prison on the charge of cooperation with PJAK.
The prisoner claims that he has finally been able to prove his innocence in the case, so this means that the present case is void for credibility and accountability by considering the similarities in the allegations in the present and past cases.
He also alleges that he has not committed an offense through providing Iranian certificate under the Iranian laws on the basis of the principle of “blood” in Iran’s laws, and he has only obtained a birth certificate on the basis of his local identity with regard to his Iranian identity.
Hassan Rastegari Majd also says that the principle of aggregation of sentences has not been enforced for him. If this principle (art. 147) would be applied on his case, at least eight years of his conviction would be reduced.
The Turkish prisoner refers to his meeting with the prosecutor during his hunger strike and the promises made by the judicial authority at his correspondence.
Mr. Rastegari Majd also calls for medical services, he claims that he has suffered from disturbances due to beatings in solitary confinement and also suffers from neurological diseases.
The 43-year-old prisoner has announced that the number of tensions and conflicts in prison which have led to his repeated convictions, were due to his nervousness and therefore demands medical attention to his condition.
It should be recalled that Hassan Rastegari, 43, son of Sultan, was convicted to two years imprisonment on charge of collaborating with PJAK in 2009.
He was arrested by security forces in Urmia on October 27, 2014, for the second time after the end of his imprisonment.
He was sentenced to 15 years imprisonment on charge of membership in the Kurdistan Workers’ Party (P.K.K). Since 2013, this Iranian-Turkish citizen has faced other cases and convictions, including two years of imprisonment on charge of carrying and storing weapons and ammunition in 2013.
He was sentenced to 6 years imprisonment for the charges of unauthorized crossing of the border and producing an Iranian identity card (conviction in 2015).
Three cases related to incidents in the prison have also been formed for the prisoner, for which he has been sentenced to imprisonment and lashes, including: he has been sentenced to 4 months imprisonment for his absence at the time of his furlough (conviction in 2011). He was sentenced to three months in prison and 20 lashes on charges of insulting the interrogation officer, disruption of the prison system, propaganda against the regime by announcing the slogan in favor of anti-regime groups and the intentional beating (in 2016).
In the last case, he was sentenced to 6 months imprisonment and 50 lashes on charges of beating and disrupting the prison system (in 2017).