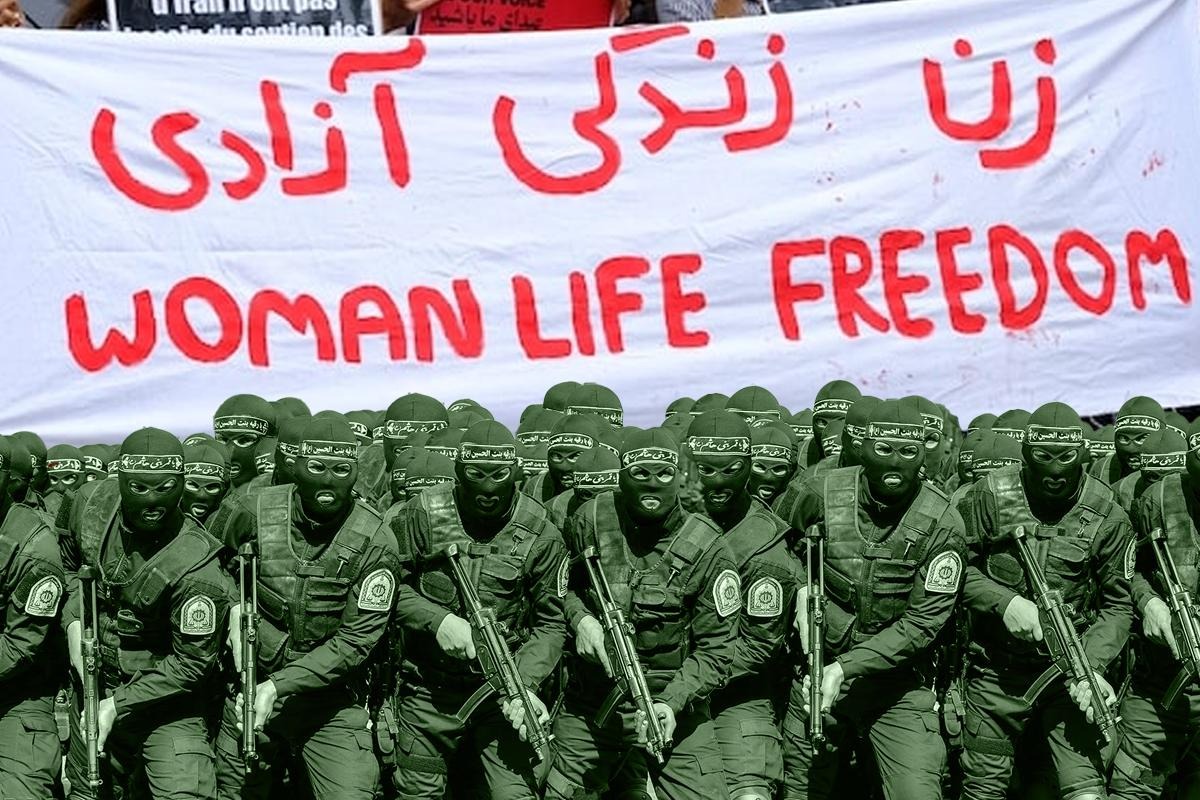 The presence of the FARAJA force is prominent; indeed, these special units are much more visible in the current unrest than in previous instances. In addition to the FARAJA, the Imam Ali Security Battalions, affiliated with the Basij Forces, under the command of the IRGC ground forces are playing a key role in the suppression of unarmed protestors.

Spreading Justice has collected evidence which shows the use of lethal weapons by the above forces. In addition to anti-riot equipment such as tear gas, pepper spray, shockers, and batons, the repressive forces have used a variety of prohibited weapons against civilians. The report released today documents a series of reports analyzed by Spreading Justice pointing to the overwhelming conclusion that there has been ongoing use of lethal weapons against protestors

The paintball gun, which can be bought and sold in the market, is designed as a weapon for playing or using in sport clubs. This gun, which is mainly made of aluminum, works with various gases, including CO2 gas, compressed air, or nitrogen.

The caliber of this weapon is 0.68, it has a range of approximately 45 meters, and it can hold up to 200 bullets per load and operate semi-automatically.

Paintball guns are not considered lethal weapons in general, however their use by law enforcement against protesters specially targeting of their face and upper body is prohibited. Several reports have been submitted to Spreading Justice, showing that FARAJA units use this weapon to target the faces of protesters, which in some cases have caused injury, especially to the eye. Spreading Justice has documented the dangerous use of this weapon in various cities including Tehran, Mashhad, Rasht, Karaj and Sanandaj. 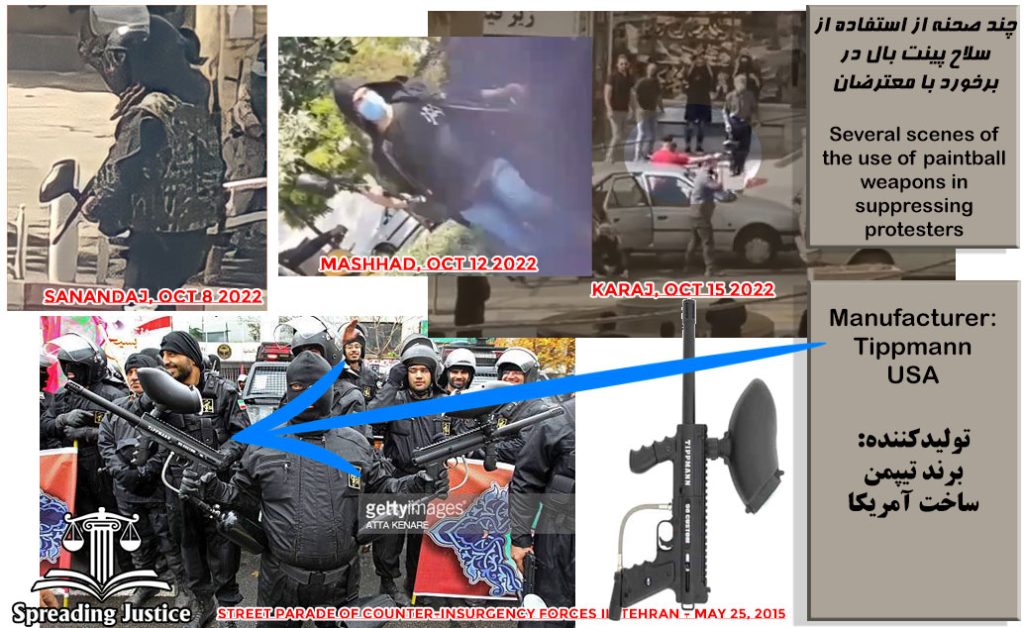 A shotgun is a type of gun that has a groove-less barrel and fires many spherical pallets at the target in each shot. This type of gun is usually used in hunting and sports and sometimes in war and for police forces. Shotguns range usually does not exceed 100 meters. Most two-barrel guns fall under this division of firearms. A shotgun cartridge usually has a cardboard or plastic casing called shotshell, and its size is expressed by a number that is sometimes called caliber in Farsi, analogously to bullet guns.

Shotguns usually exist in the form of long barreled or waist guns, but evidence found so far indicates that the only ones used in facing protesters are long-barreled types. 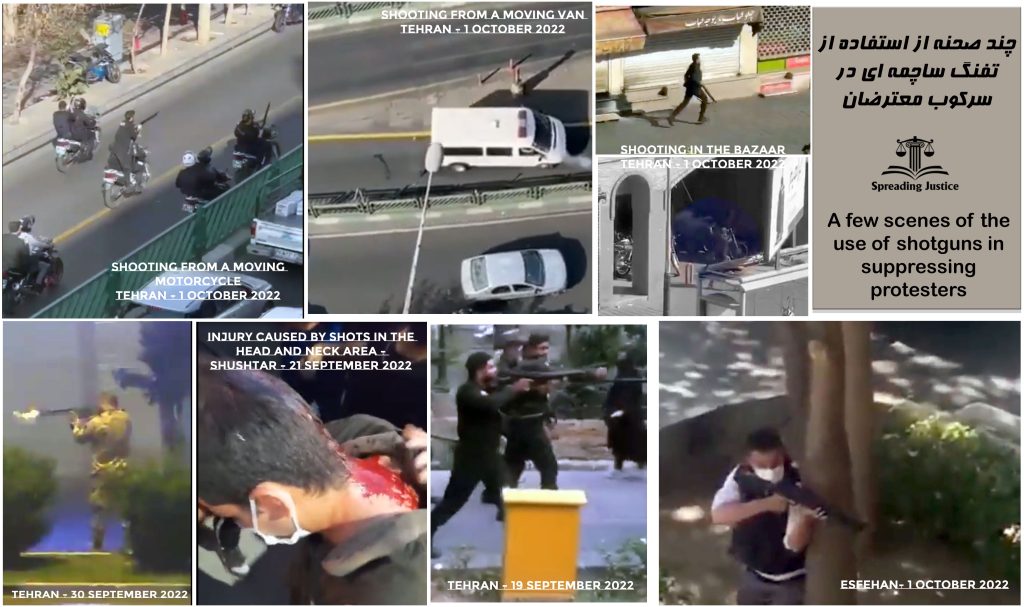 Shotguns have been systematically used in various cities by plain clothes or uniformed forces against protestors in recent protests, despite being prohibited and potentially its use being considered unlawful. OHCHR indicates that use of projectile weapons is unlawful under certain circumstances. The use of shotguns in recent protests against the protesters fails at least 3 of the requirements for the use of this weapon, in addition to having been used on unarmed peaceful protestors, shot guns have been used unlawfully because (1) multiple pallets were fired at the same time which means it cannot comply with the principles of necessity and proportionality. (2) in some cases, were used in a very short distance, (3) they were targeted at the face and neck of protestors.

According to the documents collected by the Spreading Justice, most of the shells used in the recent protests were 12mm pallets, which usually hold 9 bullets and can be deadly if used at less than 40 meters. 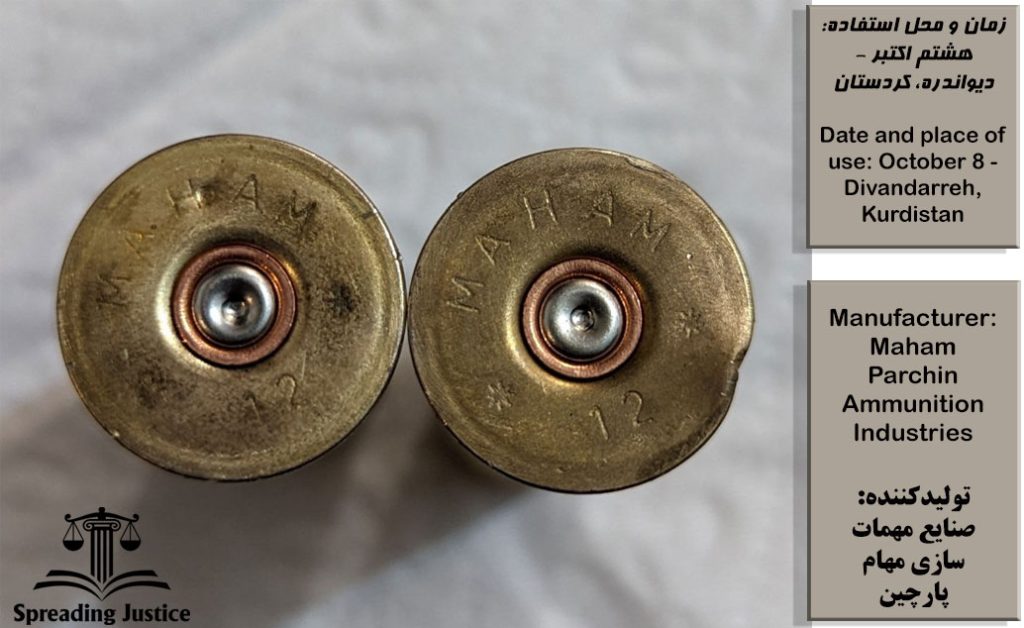 After studying the forensic documents and speaking to eyewitnesses, Spreading Justice confirms that the FARAJA forces used a shotgun was the weapon used to kill Mohammad-Javad Zahedi in the city of Sari.

Spreading Justice has talked to at least three doctors who have treated the injured in recent incidents. According to the testimony of these doctors, more than 80 patients were wounded by pallets from shotguns. It should be noted that this large number is based on the testimony of only three doctors in the cities of Tehran, Rasht and Karaj.

According to testimonies and reliable video documentation, the pallets did not only hit the lower body of the protestors, but they were found in various parts of the body including the face and torso. This shows that contrary to the statements of law enforcement officials, the forces present at the scene have used this weapon, which can be deadly, by firing indiscriminately at the protesters.

In addition to unbranded ammunition, Spreading Justice has analyzed pictures of used shotshells, which belong to the Maham company. Maham is a subsidiary of Iran’s Ministry of Defense. 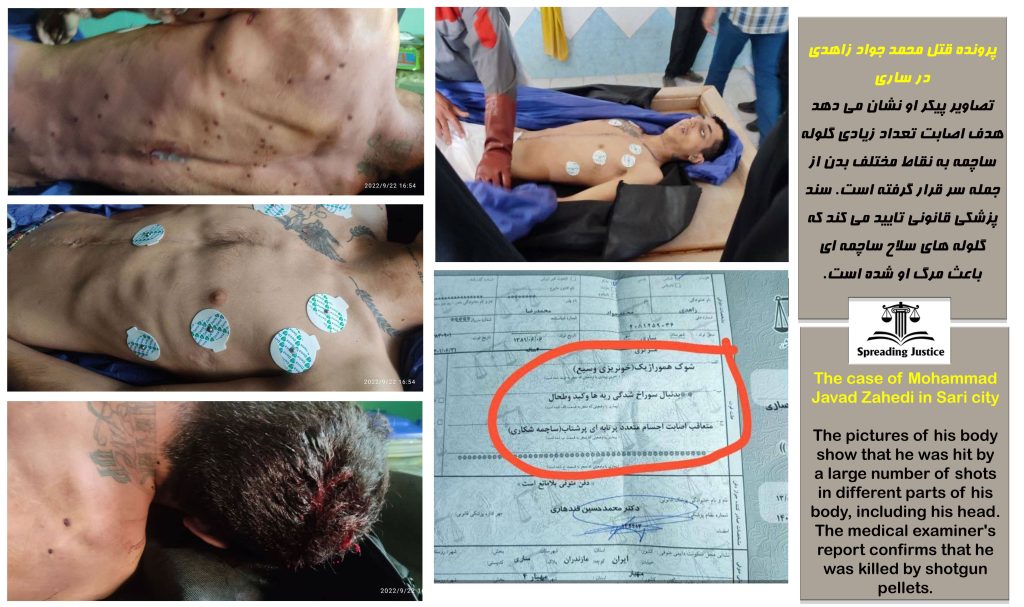 Based on reports received by Spreading Justice, the weapons of war used to suppress protestors were mainly one of the below: 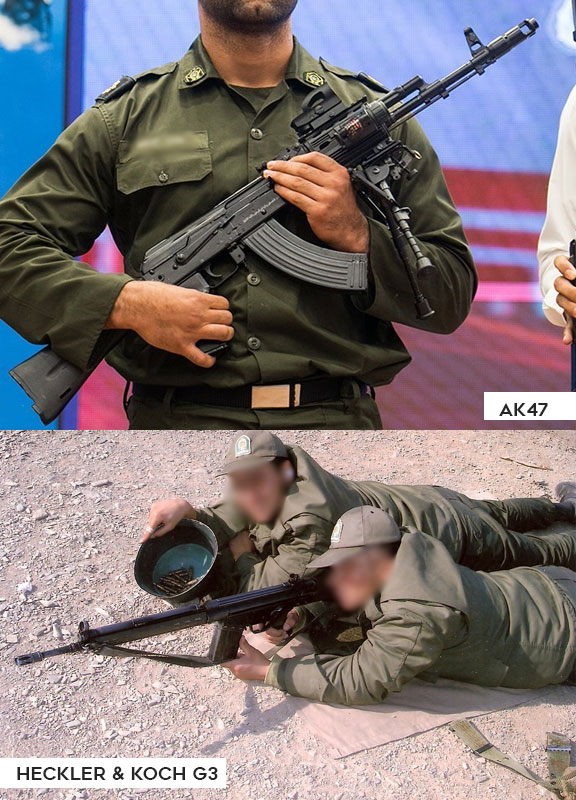 Kalashnikova (known as: Kalash or AK-47) is an assault rifle that operates with gas and is chambered for 7.62 x 39mm cartridge. The effective firing range for an AK-47 is between 300 to 400m and its maximum range is 2000m. The standard magazine capacities of this weapon are 30 or 75 rounds drum.

Another weapon that falls under this category is Heckler & Koch G3. This weapon has caliber of 7.62 and 51mm bullets. Its effective firing range is 200 to 400m and its standard magazine capacity is 30 as well as up to 100 round drum magazines.

Although these weapons are being used less than in previous instances, they were most documented in the massacre of Zahedan that came to be known as bloody Friday of Zahedan, and the use of Kalashnikova in the deadly attacks on Sanandaj.

According to the opinion of the doctors consulted by Spreading Justice, the effects of this weapon can be seen on the bodies of some victims, including Omid Sarani and Matin Ghanbarzehi.

As mentioned, the death of about 90 Baloch protesters in the event of Black Friday in Zahedan are considered the most concrete evidence of the use of these weapons against the protesters.

Considering the extent of protests in 114 cities and 79 universities, Spreading Justice cannot consider the use of these weapons as dominant way of suppressing the protestors in recent protests. 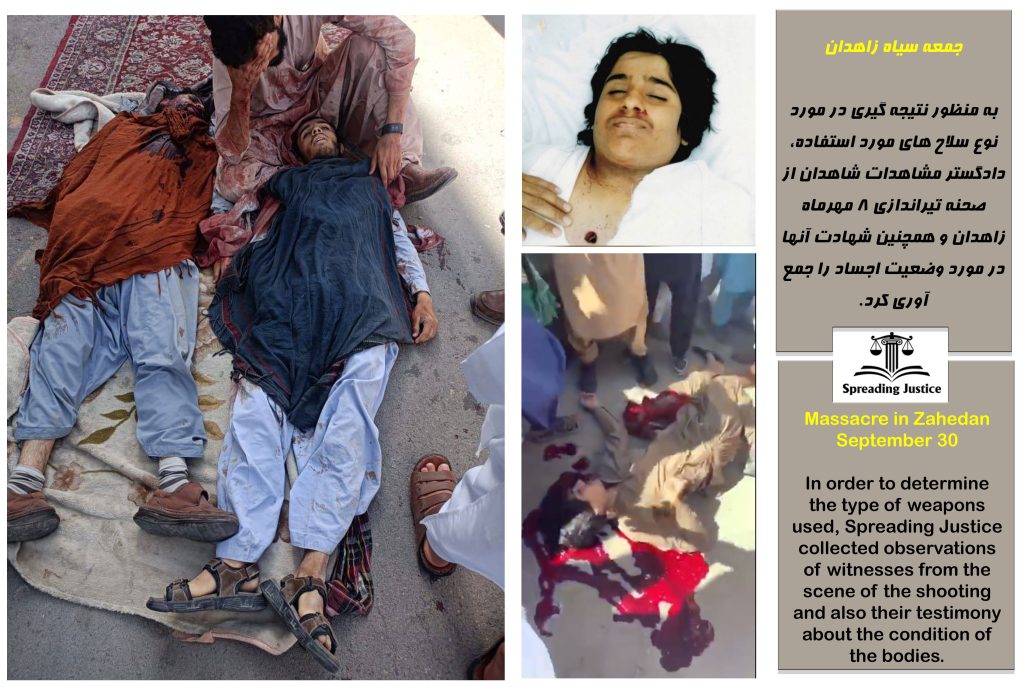 There are many types of handguns, but according to Spreading Justice in consultation with experts, the most common type available to the FARAJA forces is the German Sig Sauer, which is known as Zoaf in Iran.

This 9mm semi-automatic weapon is armed with direct gas pressure and its barrel is air-cooled. This weapon is used in short distances and its magazine usually holds 8 bullets.

There are reports of the use of revolvers and various Glock or Beretta by the security and military forces, however Spreading Justice has not been able to independently confirm their use in the recent protests, we continue to monitor and examine evidence and will update our future reports on the use of these lethal weapons in our future reports.

By examining the available evidence, Spreading Justice can confirm that this lethal weapon has been used by FARAJA uniformed officers in at least four locations in Zahedan, Karaj, Rasht, and Tehran.

However, from Spreading Justice examination of reports and evidence it is apparent that the use of handguns has not been in a systematic manner.

Spreading Justice continues its investigation and evidence gathering related to the use of weapons to suppress protestors. Official claims that the forces at the scene were not equipped with lethal weapons is false. Spreading Justice will continue its monitoring of the deployment of lethal force against protestors by FARAJA and other forces. 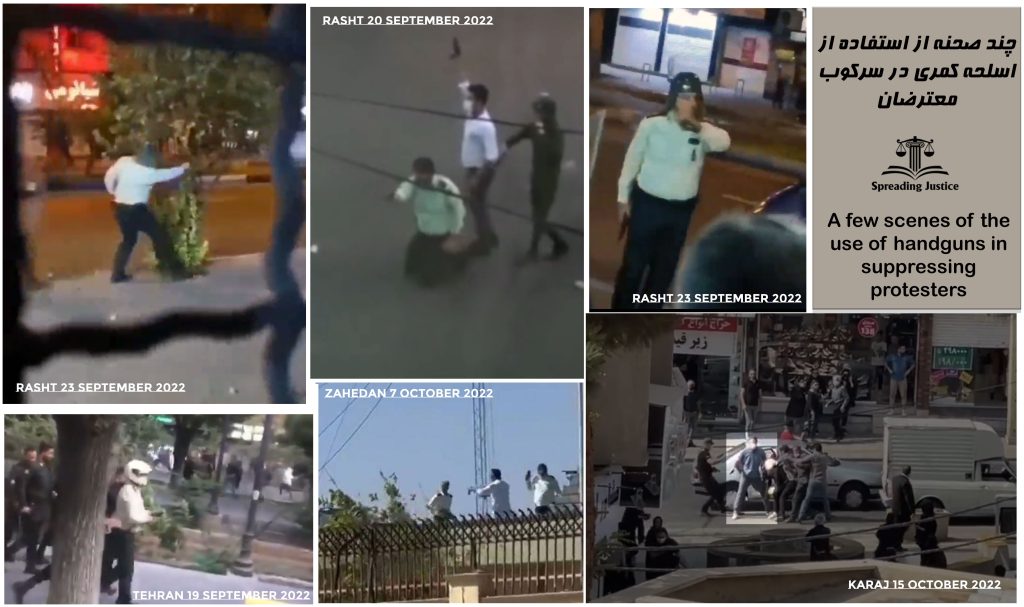