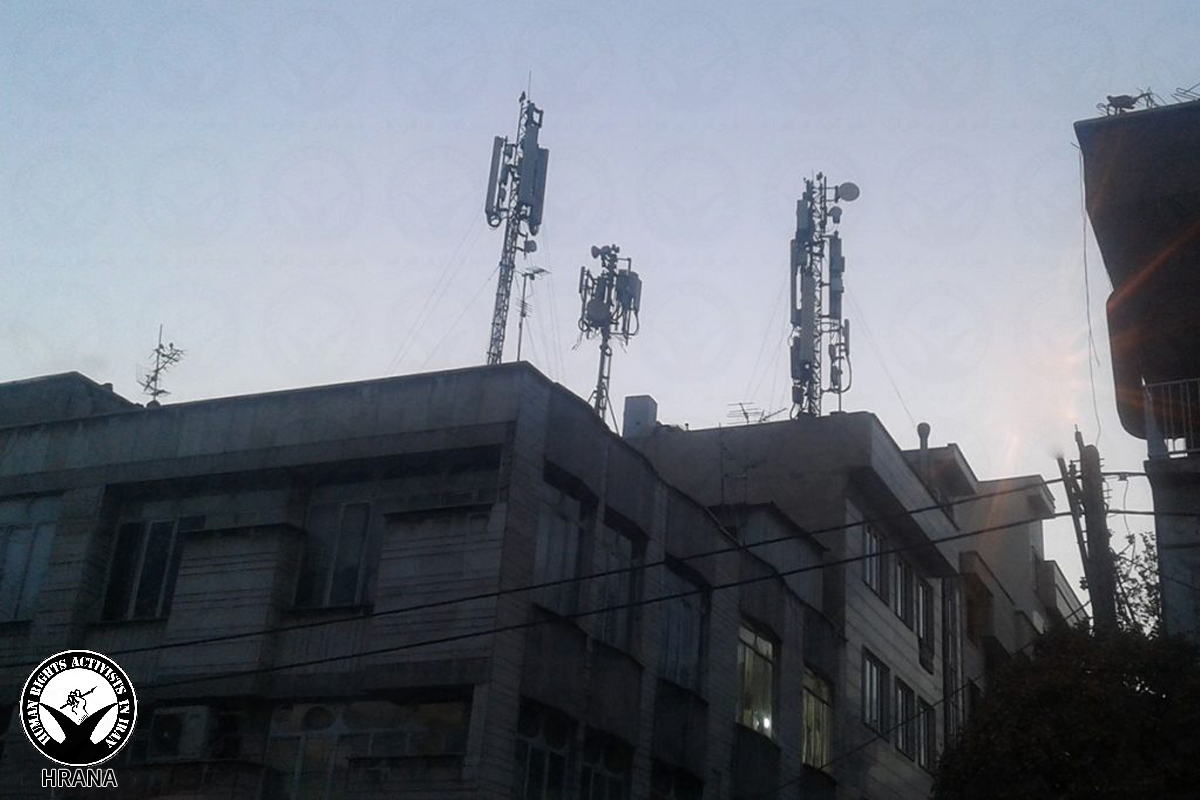 Human Rights Activists News Agency (HRANA)- Since the advent of Tehran’s cellular network infrastructure some 20 years ago, installations of Base Transceiver Stations (BTS) have multiplied in tandem with consumer demand for omnipresent “4G” icons and 5-bar signal strength. Now that the lure of this market has crowded urban skylines with steely contraptions that emit radiation, detractors fear they’re being appraised at an even higher price than the public health.

When her mother began suffering from headaches and fatigue within a few months of moving into an apartment with a rooftop BTS, Shirin’s doctor told her and her mother to vacate as soon as possible. “We were living on the third floor, and this was a four-story building,” Shirin said.

Towers and multi-story buildings are an ideal installation site for BTS, which are placed with an eye for optimal coverage with minimal material obstacles. As previously explained to the Iranian Student News Agency (INSA) by Faculty Vice President Seyyed Ali Alavian of the Iran University of Science and Technology, distance from a BTS device can only protect consumers to a point. “If the person is consistently exposed to the radiation [even at a distance], the emissions are going to have an impact,” he said.

While no current data is available to confirm exactly how many BTSs loom over Iran’s largest cities, exposure is visibly inevitable. They adorn the skyline of many residential areas and are even perched atop medical facilities.

Telecommunication firms are adamant that urban BTS towers are benign. Their opinion finds support — curiously — at the Ministry of Health and the Iranian Atomic Energy Agency, who have stated that it is “harmless” to install them near peoples’ homes.

Iranian Parliament and Tehran City Council have discussed a reduction in BTS installations for both health and aesthetic reasons, and the city previously motioned to de-BTS certain areas in the interest of “beautifying the urban landscape”. Telecommunication providers, however, have thus far been deft at stalling the legislative efforts of both Parliament and City Council to enforce significant reductions.

A creeping sense of insecurity has developed into a sense of urgency as residents learn more about the BTS waves in which they sleep, work, and commute each day, and the few who have been successful in maneuvering a removal were only able to do so in court.

A BTS installation technician who goes by “Hamid” told HRANA that cellular service providers have little real incentive to respect national standards or municipal codes. Often, he said, they are able to contravene them by paying dues to the owners of tall buildings, or bribes to those responsible for enforcing the laws.

“This way, everyone benefits except the residents of the building,” Hamid said. “Observing [industry] BTS-installation standards is costly […] It is easier and more economical for the operators to pay bribes instead of observing the standards. Some would argue that respecting these standards isn’t feasible in Iran, but I believe that they could be enforced easily if they had more public buy-in.”

Hamid said that the Telecommunication Company of Iran (TCI) manages to sidestep industrial regulations by collaborating directly with cellular service providers. “All four Iranian network operators have to install a tower in each neighborhood. You can imagine how that increases emissions density,” he said.

BTS expansion increases by the day, as do the threat they pose to Iranian citizens’ health. This trend stands in conflict with section 1, article 2 of the Iranian Citizens’ Rights Charter: “Citizens have the right to enjoy a decent life and necessities thereof, such as clean water, adequate food, promotion of health, environment, appropriate medical treatment, access to medicines, and medical, medicinal and health equipment, supplies and services in compliance with current standards of science and national standards, and safe and sustainable environmental conditions.”