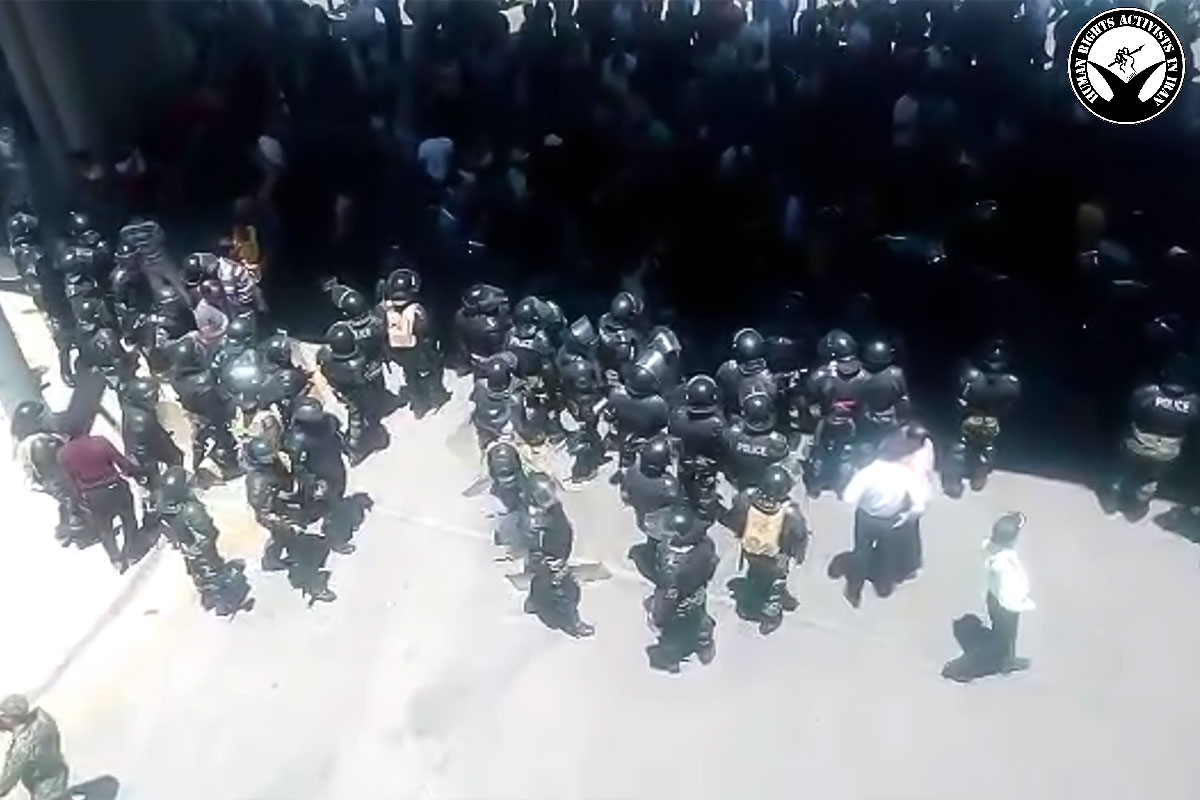 Human Rights Activists News Agency (HRANA) –  A new wave of widespread protests that began on Tuesday, continued across Iran through the week for six days. Protesters included merchants, shopkeepers and other citizens who gathered in objection to the worsening economic conditions in Iran. Their main concerns were centered around the issues of unemployment and the rising of prices and exchange rates. Rising prices, inflation, and unemployment have led to protests since December 2017. 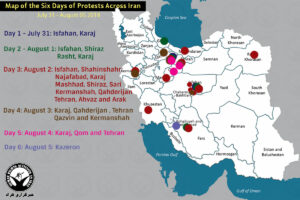 Protests in Isfahan on Shapur Jadid Street began with a strike by merchants and shopkeepers, which led to other citizens joining in on the protest. The gathering quickly turned violent when security forces attempted to disperse the crowd with tear gas and gunshots.

In Karaj, people gathered in Gohardasht Square to hold a protest rally. According to reports, many women participated. Some protesters were reportedly arrested by security and plainclothes forces and are currently held at a Basij-operated center in the Gohardasht neighborhood.

Protests in Rasht and Shiraz were accompanied by the heavy presence of security forces. Some of the videos from Shiraz indicate that a 7-year-old was shot with tear gas by police forces.

Protesters in these burned tires on the streets to counter the effects of tear gas and chanted slogans including “Our enemy is right here, they are lying claiming it’s the U.S.”, “Guns and tanks are no longer effective, mullahs should get lost,” “No to Gaza, no to Lebanon — I give my life only for Iran,” “The nation begs while *He acts like he’s God” and “Down with high prices”.

Peaceful protests turned violent in Isfahan and Shiraz when security, plainclothes and Basij forces shot at the protesters with guns and tear gas. In the videos from Thursday, protesters are seen throwing rocks at the Iranian authorities in response to the gunshots. Protesters are also seen starting fires in order to counter the effects of the tear gas.

Many protesters were reportedly arrested in Mashhad and Shiraz.

Since the early hours of Saturday, a strong presence of security forces had created an ambience of intimidation in many of the Iranian cities. Reports indicate that large protests were held in the central city of Qom, Karaj and Tehran.

People were heard chanting “Iranians, it is time to demand your rights from this regime”, “Down with the dictator”, “Don’t let fear conquer, we are all together”, “The nation begs while He acts like he’s God”.

Some reports claim that 50 of the female protesters were arrested in recent days and transferred to the quarantine ward in *Varamin’s Garchak Prison.

Many of the state-run media or news agencies with ties to the government have either denied the existence of protests or play them down as rallies incited by opposition or simply gatherings with strictly syndical demands.

The police forces in the cities of Mahdasht and Gohardasht (both located in the Alborz province) imposed restrictions on traffic and banned driving after 6PM in these areas.

Reports from sources close to security institutions, one person was shot dead in Karaj and at least 20 others were wounded.

Ali Hendiani, the director of the seminary in Eshtehard county, said: “Protesters threw stones at the seminary building and broke the prayer room’s windows…These people were dispersed by the anti-riot security forces, and the police have identified them and are on the search for them. Some have been arrested, and the mission to find the other protesters continues.”

Despite the persistence of security measures and the heavy presence of security forces aimed at intimidating citizens, protests were held in the city of Kazerun (located in the Fars province).

There are reports that protesters attempted to rally in Shiraz (capital of the Fars province), Tehran, Karaj and Qom, but strong police presence prevented these rallies from taking shape.

Subscribers of Irancell, an Iranian telecommunication service provider, reported that mobile services in parts of central Tehran and the city of Zanjan were interrupted. Some of the clients of Operator Network, another cell phone service provider, reported that they received a message regarding a temporary and nation-wide interruption to their service. It is not yet clear whether this stoppage is part of the Iranian security apparatus’ attempt to control the protests. In previous protests, there was precedence in taking such measures to curb protests.

Reza Shakarami, General Prosecutor for the Alborz province, denied reports attributed to him about the death of a young man from Karaj during a night protest. “The shooting [leading to the protester’s death] and the circumstances surrounding it are under investigation. Any quote cited from me regarding the murder of the victim by the rioters or any other individual is denied,” he said. The victim referred to by Mr. Shakarami was identified on social media as Reza Otadi.

Salman Samani, the Interior Ministry spokesperson, has reacted to online invitations to assemble. “In the last month, dozens of invitations and calls to protest rising prices, inflation and living conditions have been widely distributed. The source of the majority of such calls is outside Iran, but the invitations have been reposted and shared by people inside Iran,” he said.

Ali Motahari, Member of Parliament for Tehran, told a state-run newspaper that the authorities are trying hard to resolve the issues [the protesters have voiced their concerns about], and if the people wait and be patient a few more months, the conditions will improve. He also blamed certain movements who made attempts for the Iran Nuclear Deal to fail and whose actions paved the way for a Trump presidency, the pretext to withdraw from the **Deal.

Meanwhile, Kheirollah Tarkhani, a security official in the Alborz province, stated: “We have been trying to appease the protesters and listen to them. However, we have realized that their protests are not about economic demands and are aimed at the political structure. The small, scattered protests are not the sum of the people’s economic grievances and demands.”

——
* Reference to Iranian Supreme Leader, Ali Khamenei
** Gharchark is a women’s prison south east of Tehran; reports point to prisoners facing deplorable conditions in this prison (https://www.en-hrana.org/comprehensive-report-womens-ward-evin-prison)
*** Ali Motahari is implicitly referring to the Revolutionary Guards commanders and some hardliners whose interference in neighboring countries coupled with their push for an aggressive missile program created the conditions for Trump’s withdrawal from the JCPOA (Joint Comprehensive Plan of Action, aka Iran Nuclear Deal)