A Prisoners Committed Suicide in Ghezelhesar Prison and Died 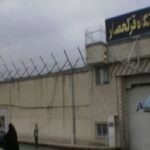 HRANA News Agency – A young prisoner committed suicide in Ghezelhesar prison on May 1st and due to delay in response and transferring him to the clinic, he died in section number 2 of the prison.

According to the report of Human Rights Activists News Agency (HRANA), a new prisoner who was charged with drug possession and trafficking and imprisoned in hall number one in section 2 of Ghezelhesar prison, committed suicide and died due to delay in response from the official on his transfer to prison clinic. END_OF_DOCUMENT_TOKEN_TO_BE_REPLACED