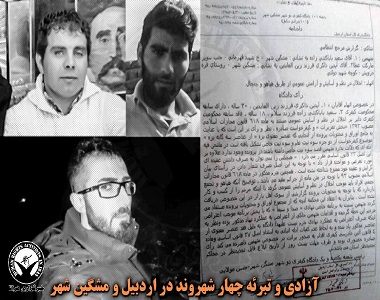 HRANA News Agency – By improvement in the situation and promises by the Ardebil prison authorities, four prisoners of conscience detained in this prison ended their hunger strike.
According to the report of Human Rights Activists News Agency in Iran (HRANA), Morteza Parvin, Mustafa Parvin, Saeed Sadeghifar and Saleh Pichganloo, four Turkish activist who were on the 6th day of their hunger strike in separate calls with their families said that their condition had modestly improved and they were transferred to the general ward’s rooms and prison authorities had promised improvements in their situation so they have ended their hunger strike. END_OF_DOCUMENT_TOKEN_TO_BE_REPLACED

According to the report of the Human Rights Activists News Agency in Iran (HRANA), two civil rights activists named Said Sadeghifar and Mohsen Mohsenzadeh for serving three months and one day in prison went to the central prison of Ardabil on April 6, 2016. END_OF_DOCUMENT_TOKEN_TO_BE_REPLACED