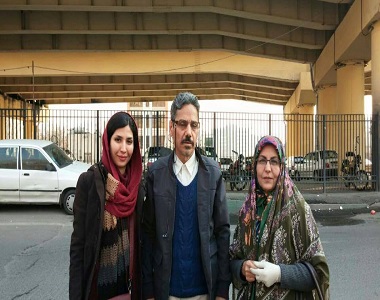 HRANA News Agency – Abdolfattah Soltani, imprisoned lawyer returned to Evin Prison by the end of his furlough. Founding member of the Association of Defenders of Human Rights has been sent to furlough after more than 4 years for first time on 17th January.

According to the report of Human Rights Activists News Agency (HRANA), judicial authorities opposed the extension of Abdolfattah Soltani’s furlough and this human rights activist returned to prison on Saturday, 13th of February.

Abdolfattah Soltani was arrested in the aftermath of the post-election protests on June 16, 2009 and was sent to ward number 209 of Evin prison. The basis of the charges against him was participating in the establishment of “Human Rights Defenders”, receiving a human rights award in Nuremberg, Germany, Propaganda against the regime and Interviews with the media on the status of his clients.

He was charged of spying by judge Mortazavi – through disclosure of his clients who were charged with espionage – as well as propaganda against the state and spent more than 7 months in prison. Mr. Soltani was sentenced to 5 years imprisonment and 5 years deprivation of social services in primary court. But He was acquitted of all charges in the Court of Appeal after 219 days in prison and his efforts to prosecute the judicial authorities did not lead to a result.

He was arrested again on 10 September 2011 and since then had been held in Evin prison. During the years that Mr. Soltani has spent in prison, often because of heart disease and blood pressure he was sent to the clinic of prison. And he was hospitalized for 41 days before a full recovery was returned to the prison.