Another Baha’i Deprived of Higher Education in Iran 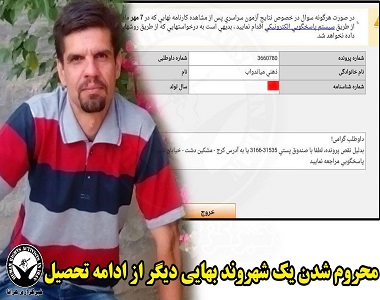 HRANA News Agency – Mehrdad Zehni Miandoab, Baha’i resident of Miandoab, for the third consecutive year has been denied of continuing his education after the exam results of 2016 was released.

According to the report of Human Rights Activists News Agency in Iran (HRANA), Mehrdad Zehni had been qualified to enroll in National University, and PNU based on 2016 exam.

This Baha’i citizen had taken the exam in 2004 also and had been allowed to enroll in University according to the National Entrance Examination but despite that, he was not able to attend the university due to “a defect in application”.

Mr. Zehni Miandoab also had enrolled last year for Miandoab Central PNU. His enrolment process had a defect-in-application problem in this center as well, and he could not go to university.

A few days ago, Human Rights Activists reported another Baha’i youth, who had been denied from university education because of the same problem in Abadan.

“Defect in Application” is an excuse that usually used by the Educational Testing Organisation to deprive Baha’is of higher education, or entry to be complementary education.

“Defect in Application” is an excuse that is usually being used by the Educational Testing Organisation to deprive Baha’is of higher education.

According to a confidential resolution of the Supreme Council of Cultural Revolution of Islamic Republic of Iran, Baha’is, in addition to exclusion from employment in public places, are deprived of university education.