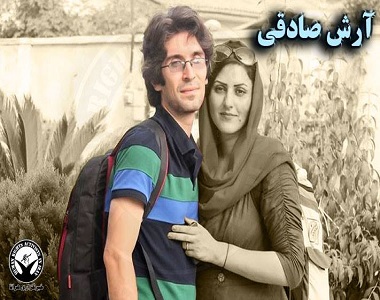 HRANA News Agency – Arash Sadeghi, civic activist in ward 350 of Evin Prison, following the “deterioration” of his condition, was transferred to infirmary in Evin prison. The infirmary doctor insisted that he needed a protein injection, due to severe protein deficiency, which should be done in a hospital because of the risk of blood clots. This prisoner has faced chronic inflammatory diseases of the airways (asthma), bleeding in the stomach and intestinal colitis in the shade denial of medical attention, in the aftermath of hunger strike.

According to the report of Human Rights Activists News Agency in Iran (HRANA), according to the prison doctor that examined Arash Sadeghi, this prisoner needs a protein injection, due to extreme protein deficiency because of his stomach inability to eat solid food and not be disposed of in the large intestine. The doctor has said that if Arash Sadeghi would not receive protein then his heart, liver and kidneys would suffer more than before.

A source close to Arash Sadeghi, in this regard, told HRANA: “The doctor has strongly recommended that Arash Sadeghi needs to get this serum injection in a hospital, because it may cause blood clots and he should be under medical care.”

The source said that Sarallah Corps’ agents are still preventing Arash Sadeghi’s transfer and hospitalization, and added: “The reason to avoid Arash Sadeghi’s treatment process by the IRGC is because a while ago Arash had sued them because they prevented his wife, Golrokh Irai from receiving medical treatment and did not send her case for review by the Supreme Court, despite clear instructions by the prosecutor.

Mr. Sadeghi is struggling with chronic inflammatory diseases of the airways (asthma), and bleeding in the stomach and intestinal colitis due to his long term hunger strike, and lack of medical care. On the other hand, this prisoner and his wife, Golrokh Irai who is held in women’s ward, since several weeks ago have been deprived of meeting each other due to the prosecutor’s direct order.”

This civil rights activist who had gone on hunger strike for the second time on January 22, at the same time as Golrokh Irai’s was arrested, was transferred to ward 350 on January 25, which is a place with minimum communication facilities with outside.

Mr. Sadeghi who started his second hunger strike just a few days after ending his first 71-day-long hunger strike, while being in a critical physical condition, has inappropriate health condition. Mr. Sadeghi had been transferred to ward 2-A of the Revolutionary Guards, in Evin prison, “under the pretext of” transition to hospital on January 25, and after three days he was transferred to ward 350. His personal belongings including his “watch and wedding ring” have disappeared in this moving.

Arash Sadeghi, civil activist imprisoned in Evin Prison, had started a hunger strike, demanding a fair trial to address the accusations against his wife, Golrokh Irai, which he ended after 71 days with the promise of considering his demands by the authorities, when his wife left the prison on January 3.

It should be mentioned that on his latest referral to the hospital the specialist doctor confirmed that he had stomach bleeding up to 12.5%, shortage of hemoglobin (anemia), serious and severe lung infection and had to be hospitalized for at least 4 to 5 days.

However, due to the prosecutor, prison security and Sarallh Corps pressure, this prisoner was returned to Evin prison on February 6, 2017.