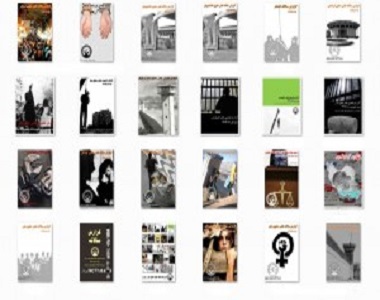 Peace Line Monthly / Kouhyar Goudarzi – It was May Day, the first of May, the international worker’s day, I was there to report on the rally of the workers of the Syndicate of Tehran and Suburbs Bus Company (SWTSBC). It was about noon and the crowd kept growing, citizens, worker’s families and students. A young bearded man with long hair was taking pictures and videos in the middle of the crowd. While some were joining and some were leaving, the riot police arrived with Commander Ghodratollah Mahmoudi, the same commander in charge of the riot police clashing with protesters on the rally of the March 8th in front of The City Theatre. Now people have started to spread and the undercover forces are starting to increase in numbers. A few of them start to gather around the young man and are pulling him towards one of the gray cars, the young man struggles to pull himself towards the rest of the crowd, they beat him up with baton and hit him with pepper spray. I am watching all this from the window of a gray car. It was only a few minutes before that one of the undercovers had pulled my hand and taken my phone, and now I am watching the scene sitting in the gray car and sharing a handcuff with abdolreza Tarazi who later I found out, is a member of the syndicate.

They take us towards the Niloufar police station. Interrogations, familiar charges and Ebrahim Madadi who in the middle of the chaos is calmly explaining his civil rights. The young man with the long hair and now ripped cloths is taken to the next room, it does not take long before he starts screaming, and a little later the door opens up and a soldier walks out of the room, takes the baton which was on the table and walks back in to the room. Ebrahim Madadi kept talking: “a few night ago Mr. Dorri was on the TV saying: ‘we hope the police treats the citizens well.’” 10 minutes later the young man barely able to walk is brought out of the room.

In the middle of the night at the detention center of the security police, when I wake up from the few hours of quiet sleep; he comes and sits beside me and we talk, I found out his name; Keyvan Rafiee.  Later on when we were released I came to know he was the director of the “Human Rights Activists in Iran (HRAI)”, and he found out that I was the director of the “Committee of Human Rights Reporters (CHRR)” in Iran.

I met Keyvan a couple of times at coffee shops and amongst common friends, till he was arrested, imprisoned and eventually left the country. We were always somehow in contact because of work, and he sometimes read my blog. Nevertheless I followed HRANA* due to the scope of my work. At many levels HRANA along with CHRR were of the most critical references of documenting the human rights violations in Iran. Both organizations started their news reporting agencies as weblogs and it took months before they became proper websites. HRAI just like any other organization has had its share of ups and downs during all these years, with so much difficulties of group works in Iran’s atmosphere, pressures, threats and security lockdowns and suppressions. Many of the HRAI members were arrested and received long prison sentences during the fall and winter of 2009-2010. The peaceful practice of the right to defend the human rights as a civil action, has always came at a high cost. Need not to forget Keyvan’s continuous efforts to maintain an organized work and to increase the outputs on human rights. Thanks to the many years of work in human rights, HRAI now has the vastest infrastructure in information and news among the media and activist groups of Iran. The continuation of a team effort towards Iran’s transition to democracy should be taken positively.

In the hope of many more anniversaries and valuable achievements.