Future Belongs to the Fallen Buried Without a Shroud 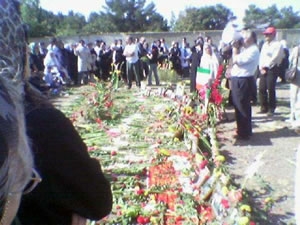 Prison is the tale of body and lash, fist and captivity, rope and neck, fire and skin, lead and heart.  Prison is a melody to keep alive hope; prison is a pane to a glistening future.

A tormentor is crushing his prisoner’s hands so that he doesn’t play the guitar or compose songs and lullabies for Chilean children, but he sings without pause:

Come; we hurl down the road spread ahead

Another future is about to evolve

And the guitarist adorns the pages of a poet’s collected works, and people adore the master verse in their poet’s masterpiece.

Beria passes judgment, murders, hacks into pieces and exiles anyone who believes differently.

A youngster at school reads his country’s contemporary history, and by hearing Beria’s name, he spits on the floor.  Another youngster angrily tears the pages of his book apart.

A caravan of women, girls, children, the young and the old are moved towards the vast deserts of Nugra Salman for genocide.  A child  clenches her doll tighter to her chest and counts the stars with eyes wide open while she is buried under piles of dirt.  A girl commits suicide before her honor is stained under Ali Hassan Majid’s brazen gaze.

In the third act, my little sisters without a bridal gown, innocent and pure, with the sun shining down on their coffins, return to their birth place.

A child in Halabja boldly urinates on Saddam’s picture and statue.

A young Shi’a during the dictator’s execution howls, “Go to hell.”

And a Kurd steps into Baghdad’s castles and ridicules Saddam.

The General rapes the family of a prisoner in order to break his resistance, and to keep Nowruz alive, a prisoner sets himself ablaze to become eternal in the flames of Nowruz.

During Nowruz 2009, the children of Diyarbakir in every corner of their neighborhoods daringly chant, “The General is a coward.”  A crowd of millions gather around Nowruz’s bonfire, the same flames that the General thought extinguished.

A prisoner with broken eyeglasses heads to see his mother for the last time so that he can carry her image with him to his grave.  A few weeks later, his clothing and glasses are delivered to his mother.

Years later, another prisoner from Evin writes to his fiancé, and the girl reads the letter to her grandmother while the old woman holds the broken eyeglasses in her hands.  The girl reads:

Anywhere in the world, let them remain unknown in broken tombs, without gravestones or crosses.

Let them become one with the soil; let a free cypress whose roots run deep in their hearts and its branches soar high in the sky be their mark.

Let them remain unknown.  “Future belongs to the fallen buried without a shroud.”