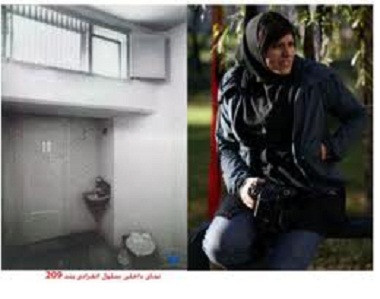 Recipient: Maryam Majd, Isolation Cell, Ward 209
Shadi Sadr
I place a picture of the isolation cell in Ward 209 in front of me and stare at it. Thousands of thoughts, images and past events come to life. I try to fight them back, but it isn’t possible because now, you’re there in a solitary confinement in Ward 209.

You’re there in one of those two isolation cells at the end of the hall housing Women’s Prison Ward; you’re there under a twenty-four hour burning lamp that keeps you awake at night yet it is totally useless all through the day. During the month of June in Tehran, the sun’s rays shine directly towards the cell’s roof and tiny window making the air inside burning hot.

I gaze at the picture and remember a day in June of 2009. Two years ago, trapped in one of those scorching hot cells, it felt as if I could breathe no more. According to the decree governing Ward 209, I couldn’t even bang on the door in order to make the prison guard open it momentarily. Only a few seconds could suffice. If the door had been opened only for a moment, the cool air from prison guards’ air-conditioned room would have reached me to restore my breath. Ringing the bell had no effect either; no one came.

The vent above the prison cell was shut. I placed my head at the bottom of the door from where some cool air was coming in. I don’t remember how many hours I remained squatted and attached to that narrow strip at the bottom of the door. Now, your friends are truly worried about you because of your history of heart problems. How do you breathe in a blistering cell with that frail heart of yours?

My dear Maryam, the news has been spread that you called home yesterday and cried, “Get me out of here!” I can visualize an image of you at that precise moment when you uttered these words: Standing blindfolded, draped under a chador, facing the public phone at the end of the main corridor in Ward 209. On one side of this hallway, there lies a row of prison cells whereas the medical clinic and interrogation rooms are located on the opposite side. You are facing the phone with your interrogator standing behind you to carefully watch whether you say one word beyond what is permitted so that the phone can be disconnected immediately.

I recall one of my hardest and longest interrogations, one of those particular sessions that begin at sunrise and last all through the day until with the call for the evening prayer, one realizes that the night has fallen. At sundown, the interrogator allowed me to call home. I terribly missed Darya who was only seven years old at the time. My mother answered the phone; my voice trembled as the knot in my throat began to burst, but she stopped me angrily. “What are you crying for?” she asked scornfully. Then she reminded me that I couldn’t cry, not in front of the interrogator. She told me that crying had to be done when I was alone in the solitary confinement.

That scolding was one the sweetest and the most important and effective reprimands that I have ever received from my mother. The resulting tranquility and strength bestowed upon me are beyond words. I wish for your mother to read what I am writing. Should you call again, I want her to know how she must talk in order to calm and empower you. I wish her to say only one sentence next time you contact her: “Everyone is asking about you.” With this single sentence, you will realize that you’re not forgotten, and the news of your arrest and worrisome situation has reached everyone. You will know that your friends are making every possible effort to set you free as soon as possible. I wish your mother to know that the fear of being forgotten is worse than any torture and pressure for a prisoner; the sense that people outside the prison, even your friends, are carrying on with their lives. I wish your mother to know that how much peace and power this single sentence can bring you.

My dear Maryam, I think about you constantly these days and how much you have contributed to the photography of women’s sports despite your young age. I think about the fact that all photographers seek to be recognized through the pictures they publish, but contrary to all other photographers, you shot what was not to be seen.

In Iranian newspapers, photo-journalism of women’s sports and athletes is destined to be censored, eliminated and hidden from public view. A woman’s body, her movements, and the life that runs through her figure are all forbidden subjects in Iranian media. However, you continued your work tirelessly. Everywhere and in all types of sports, if there was a match or a practice, you were present to shoot pictures without a twinkle of hope to publish any of them. In short, you were the photographer whose pictures and herself were never seen.

Instead, you were noticed in passing beneath the shadows of your pictures. Except for a handful of activists for whom you know that women’s sports are imperative, few have seen your pictures and recognize the value of your grand contributions in the recent years. Few recall your best shots since you were even denied the permission to display them in a gallery.

We know that you have been waiting all these years for the opportunity to photograph female athletes attending the Women’s Soccer World Cup in Germany, a chance to be seen, an opportunity to use years of experience to capture from behind a lens the lives of women athletes from different countries, a chance to leave your mark behind. However, they took away not only your freedom but also this outstanding opportunity from you.

Today, one of our mutual friends asked, “Could it be that Maryam has been caught in the middle of the ongoing quarrel between FEMA and the government of Iran over women athletes’ uniforms?” With this statement, I remembered your last collection of pictures taken from the gathering of women’s soccer players protesting in front of the Federation building, the last pictures posted on your personal blog. I reply to our friend, “I wouldn’t put it past them to reach such a conclusion as they have a long history of conspiring against others by connecting totally unrelated dots together.”

I refer to these officials as “they” not because I don’t know who ordered your arrest only a few hours before your flight to Germany but because they are such cowards that they are not even prepared to step forward to announce, “Yes, we have arrested Maryam Majd, and these are the charges against her.” “They” are afraid to such a degree that they blindfold you so that someday later, you won’t recognize them walking down a street by accident. “They” fear to disclose what their occupations are even to their children. “They” tremble at the thought of a future in which I will return to Iran and walk with you, hand in hand, through Evin’s open doors into Ward 209 to show each other our cells and interrogation rooms.

A day will come that neither “their” anonymous names nor concealed faces, hidden from us by forcing prisoners to wear blindfolds or face the walls, will help them, not even the lies they have told their wives, children and relatives. The time will come when they must stand trial in front of the collective conscience of a nation to tell what they did inside the interrogation rooms, torture chambers and isolation cells.

That “inevitable day” is approaching, dear Maryam, even though right now, trapped inside the tight confinement of your isolation cell, you might be thinking that the most horrid days of your life will last forever. That inevitable day will come, sooner or later, without a doubt.

————————-
I have borrowed the phrase an “inevitable day” from a poem written by Qeysar Aminpour. These days, I highly recommend reading the verses of this poem again and again.