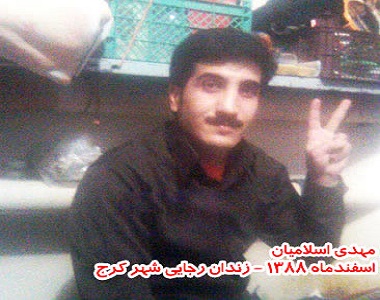 HRANA News Agency – Mehdi Islamian, a prisoner executed in 09May2010 along with Farzad Kamangar, Farhad Vakili, Shirin Alam Holi, Ali Heydari, was charged with donation of about 70 dollars to his brother. He was arrested in March 2008 and sentenced to death. Prior to supporting his brother (Mohsen Islamian), he was working as a taxi driver and not involved in any political activity. His brother, Mohsen Islamian, had been previously executed with charges of setting a bomb in a mosque named Hoseinieh Rahpouyan in Shiraz in 11May2009.

The following is the full text of this unpublished letter:

“This letter has been prepared on 26April2010 for all human rights activists and organizations. We ask you all to translate this letter into different languages ​​ and publicize in different regions of the world.

I wish I was God; a God with less endurance so that I could prevent the cruelty of tyrants who tear apart the hearts of our beloved mothers and children in the name of God. The cruel individuals who only look like humans but have no idea of humanity. They are human-like creatures hiding behind the mask of religion and humanity. They shed the blood of young men and women of my country with no hesitation. They have betrayed the blood of martyrs killed during eight years of sacred war with Iraq.

Where is God to observe the cruelty of this people, who have set hanging rope in every alley and street of my country. Even young kids are expecting death and execution, and “death” has become very familiar for Iranians and has been spread in every spot of my country.   Those who speak of mortality and humankind are the foreword of immorality, corruption and separation. A religion that has been promised by God for all people has been now owned by a group of people who represent themselves as the owner of heaven. Alas! thieves will be residing in hell forever! Don’t we need to use our wisdom and intelligence to distinguish the good from bad, select a decent way of living, and acknowledge our right to live?

Do we have the right to be beneficiary of God’s creations? Do we have a right to live? Poverty, prostitution, prison and death at the end? Is this our only right of living? Is it possible to accept that God’s will for us is only suffering and death? Suffering that is created by the current tyrannical government that is ruling the country in the name of God and religion. This regime is hiding behind a misleading mask of religion and only looking after its own agenda.

Don’t we have the right to know God’s grace? Don’t we have the right to follow our own prophets’ and imams’ goals? Was the uprising of Imam Hussein a rebellion of cruelty against cruelty? This regime has been hanging many young and good people of Iran and deprived them of God’s grace and beauties. Do the people who fight for improving the quality of life of Iranians deserve arrest, jail, and torture?

Is the fight against corruption, lies, and deceit, a fight against God? What is God asking us as human being except worship, humanity, and goodness to each other? Does God want the people to steel, become prostitutes, or do thousands of other corruptions in order to carry on with their lives? Do you, who speak of God, really know God?

Is this what our religion commands us? Have you let the people of Iran to truly worship and obey God and his commands?

I am also one of those who have been imprisoned and tortured in your prisons solely because of my natural affection towards my brother and without any defiance against God, Islam, or my beautiful country.

I am also one of the young Iranians who is charged with “defending humanity” and victim of a shameful scenario plotted by a bunch of coward criminals who would like to kill me without any legitimate document or justification. They are expanding disgraceful act of killing Iranians throughout the world and would like to publicize their hatred in the name of the people of Iran.