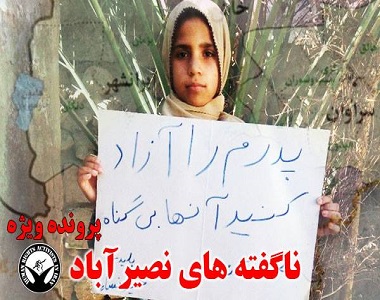 The authorities have had many contradictionary announcements about this mass arrest. The families of these prisoners are concerned about the fate of their beloved ones while emphasizing on their innocence.

By sending a letter they have asked for help from international human rights organizations and The UN Special Rapporteur on Human Rights. The complete text of this letter, a copy of which has been provided for HRANA is as following:

The letter of Nasirabad prisoner’s families to all international organizations, especially the excellency, Mr. Ban-ki-moon and Mr. Ahmad Shaheed.

We the families of prisoners of Nasirabad, are concerned about the status of our beloved ones and children, about whom there is no information after two months. Based on evidences and contradicting claims of authorities, we believe the allegations are false and we are worried that our family members would be convicted to heavy sentences in an unfair judicial process, without trial and without having lawyer.

1-    All of these people were resting in their houses and they were arrested while they did not know the reason of their arrest. Considering the arrest of some members of a group, based on authorities claims, how it is possible that they would have slept in their houses?!

2-    While after several hours of investigations and searching of the house, even the child’s cradles no evidence was found, 90 percent of insecurity of the whole province was referred to them. How can a mind accept, that after 8 years of investigation, not even a single piece of weaponry or bomb or evidence could be found?

3-    One allegation is military and terrorist training and learning to make bombs in overseas, while most of them never departed the country, or some even never had departed the province.

4-    Before January 4, the state and provincial authorities, like Zolfaghari and deputy of governor, had rejected the terrorist links and called the incident as criminal, but under pressure of state over provincial, suddenly these arrests were carried out.

5-    On January 5, in revolutionary guard’s website, it was stated that a terrorist group with 9 members was eliminated in Sarbaz. Hours later, Major Hossain Rahimi, the commander of police forces in Sistan and Baluchistan province, said 12 people. Then Hossainali Shahriary, the Zahidan’s PM rejected any relation of arrestees with Jaish-Al-Adl and called this group a separated and more dangerous group. Next, major Ashtary, deputy chief of Sistan and Baluchistan police said they are responsible for 90% of insecurity of the province, including the terror of mulavi Jangi Zehi and more, since 2008.

6-    After the letter of family of prisoners who have been charged with terror of mulavi Jangi Zehi, a public television broadcast of the confessions and even a documentary film based on those confessions was composed and the case was called closed, the authorities called allegation irrelevant and wondered that case is closed. On January 11, Hojjat al Islam Hamidi, chief of justice department of Sistan and Baluchistan province, rejected any relation between Nasirabad arrests and the terror of mulavi Jangi Zehi. On January 14, major Rahimi, in a new announcement stated that in a joint operation with revolutionary guards and justice department forces, 18 people who were involved in terrorist activities and terrorized the region have been arrested. This is while he had said 12 people were arrested. On January 10, the parliament member of Zabol said, after the arrest of 12 terrorists in regard of the case, another 8 terrorists were identified and arrested. This is while all were arrested while sleeping in their village on January4. On February 6, in a conflict between revolutionary forces and Jaish-Al-Adl, in Asig region in Saravan, some security forces were killed, security forces claimed they have captured and arrested some of the Jaish-AL-Adl’s members and Jaish-Al-Adl claimed that they have exploded a revolutionary guard’s car. On February 7, authorities announced a terrorist group in Saravan is identified and arrested. On February 9, Saravan’s PM, Mr. Mirmorad Zehi, publicized the news of the discovery of 250 Kg of explosives in a team-house in Saravan. On February11, Ali Ousat claimed that all of those who were involved in terrorizing Baluchistan during past 8 years are eliminated. On February 13, the ministry of intelligence and security, publicized the news of elimination of a group and discovery of 350Kg explosives. Authorities previously had stated that the arrestees of Nasirabad are the cause of 90% of insecurity in Sistan and Baluchistan. On February 15, Aliasghar Mirshekar, deputy governor for security, publicized the news of arrest of members of two groups who have been the cause of all of the insecurities during past 8 years in Sistan province. In his statements, bombing attack and murdering 33 Chabahari citizens in Tasu`a and terror and murdering 43 officers is added to the allegations of Nasirabad arrestees.

With the consideration of all these contradictions and testimonies of trustees and witnesses for their innocence and their presence in public during the time those incidents  were happening, we are concerned that as usual, some of these prisoners would be released for averting public opinion and for the rest, death roll and heavy sentences would be executed. For these reasons, we kindly request you, to try your best for the freedom of these people.

The family of Idris Balidehei

The family of Amin Raeisi

The family of Bashir Balidehei

The family of Abubakr Mollazehi

The family of Sattar Bahramzehi

The family of Amin and Yousef Bahramzei

The family of Amer Gahramzei