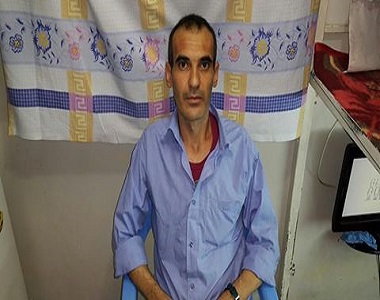 According to the report of Human Rights Activists News Agency (HRANA), prisoners have said that one of the clinic’s physicians treated the prisoner very badly for different excuses like presence of a friend or even, ethnicity or the language.

Ramazan Ahmad Kamal has started a hunger strike in protest to medical negligence since February 21. According to prisoners after an unfinished surgery operation and sending him back to prison his right hand’s fingers are not moving anymore.

While trying to arrest him, the Iranian border watch forces shot him in the stomach, left shoulder and thigh, while he was trying to go back to Iraqi borders, in 2009.

These bullets are not taken out of his body after 7 years and lack of medical treatment has led in severe infection and loss of right hand’s muscles.

This Kurdish prisoner from Kobani, was beaten during his transfer to the hospital and passed out.

Kayvan Samimi, a former inmate who helped during his transfer to the hospital has described this event in an interview with HRANA.

Amnesty International also issued a statement in January saying that the Kurdish Syrian prisoner needed surgery. The organization asked for the immediate investigation of the status of the ill prisoners in Rajai Shahr prison.

Legal advisers of “Human Rights Activists in Iran” believe that the prisoner could take advantage of parole by passing 7 years of his 10-year imprisonment.

Ramazan Ahmad Kamal, was arrested in 2008 along with three other members of PKK who said that they had entered the Iranian territory mistakenly.

The Kurdish prisoner was sentenced to death on charge of membership in the PKK in the revolutionary court of Khoy, but the supreme court reduced the sentence to 10 years in prison.

This prisoner is currently serving his 8th year in hall number 12 of Rajaei Shahr prison.