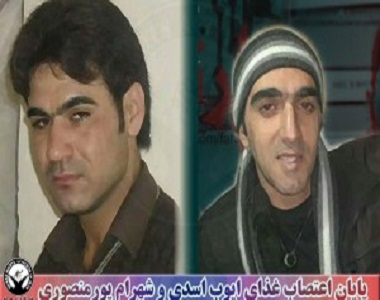 HRANA News Agency – On July 4, Ayoub Asadi ended his hunger strike on its 29th day in Kashmar by his family’s insistence as well as Shahram Pour Mansouri on the 26th day of his hunger strike by threats and promises of authorities in Rajaee Shahr Prison.

According to the report of Human Rights Activists News Agency in Iran (HRANA), on July 4, Ayoub Asadi and Shahram Pour Mansouri ended their hunger strikes in Kashmar prison and Rajaee Shahr Prison.

Ayoub Asadi, political prisoner who is ill and has been exiled to Kashmar, was on the 29th day of his hunger strike to protest against the lack of medical care and medical leave, as well as the unfair sentence of 20 years imprisonment.

A source close to Asadi family approved the end of hunger strike and told HRANA’s reporter: “His family urged him from a week ago that the authorities do nothing for him and the prosecutor of Mashhad has said that ‘even if he would die, we would do nothing.’ But Ayoub continued until they just promised to send him to the hospital to address his illnesses in the coming months but paid no heed to the rest of his demands, including furlough and the unfair sentence of 20 years in prison.”

The source informed about the health status of Mr. Asadi: “His physical situation is critical. His family did not speak with him on the phone, he was held in solitary confinement since the beginning of the strike. But his friends were calling from the prison and informing his family that his eyes could not see more than a meter. Therefore, his family urged him to break the strike and on July 4, his friends told that he had ended his hunger strike but also his health condition was not suitable.”

A source close to the prisoner by announcing the news told HRANA’s reporter: “Shahram lost at least 11 kg weight in this period. On June 3, Shahram Pour Mansouri ended his hunger strike on its 26th day by promises and threats of head of ward 4 of Rajaee Shahr Prison Mr. Shojaee and also Mr. Mardani head of the prison.”

The source added: “The prison authorities told him they would address his case.”