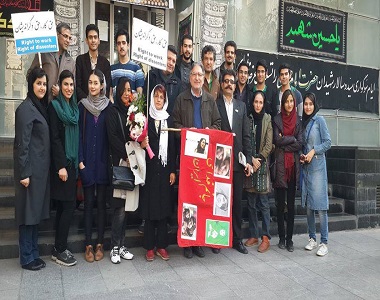 HRANA News Agency – On November 10, Bahai students who have been excluded from tertiary education joined the Iranian civil rights lawyer Nasrin Sotoudeh in her three-week-old demonstration in front of the Bar Association building in Tehran.

According to the report of HRANA qouted from Daneshju News, she is claiming the right to be reinstated by the Bar Association as a practicing lawyer, having been excluded from practicing for three years.

She has been joined by a number of human rights activists, including the prominent Iranian film director Mohammad Nourizad.

Mr. Nourizad reported on his face book page that a group of Bahai students who have been excluded from tertiary education had joined the protest.