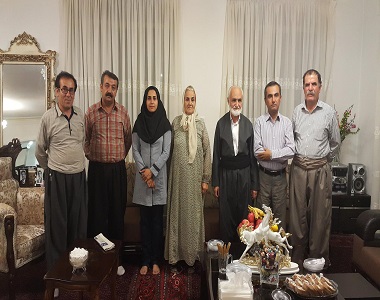 HRANA News Agency – A group of civil, political and human rights activists went to the home of political prisoner, Habibollah Latifi, to congratulate Eid Ghorban to his mother and sister.

According to the report of Human Rights Activists News Agency in Iran (HRANA), civil activists expressed their hope at this meeting that all political prisoners will be released.

Habibollah Latifi’s mother said last Thursday that she had a close meeting with Habibollah and he had been in good physical and mental condition.

In this meeting, “Hassan Amini”, a member of “Kurdistan Quran school” said, “During this time, Habibollah Latifi’s mother has endured pain and suffering and she is waiting for the freedom of his son. We hope that this political prisoner will return to his family very soon.”

“Ejlal Ghavami” spokesman of “The Human Rights Organization of Kurdistan”, also said, “It is expected that in the time of “The cabinet of Plan and Hope” all political prisoners such as Mohammed Siddiq Kaboodvand and Kordpour brothers will be released and an appropriate atmosphere will be created for civil and political activists.”

It should be noted that Habibollah Latifi has not had any furlough, since he was arrested in 2007 due to being sentenced to death penalty.

Habibollah Latifi, a senior student of Industrial Engineering at the University of Ilam, was arrested on 23rd October 2007 and after spending more than three months in solitary confinement and under physical torture he was charged with “Combat and Corruption on the Earth” and sentenced to death by the Branch 1 of the Islamic Revolutionary Court in Sanandaj, presided by Judge Hassan Babaei.

The verdict was sent to the Court of Appeal, by his lawyers’ objection, but it was upheld in the winter of that year and then for a final appeal it was sent to the Supreme Court, where the sentence was confirmed, too.

Finally, after eight years endeavor by the family and lawyers of this political prisoner Habibollah Latifi was pardoned by the leadership, and his death sentence was suspended.