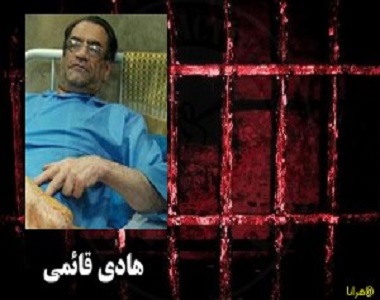 HRANA News Agency – Seyyed Hadi Ghaemi who had previously been imprisoned in exile in Gonbad Prison was transferred to Evin Prison after deterioration his health condition in May 2015 and after 5 years. Despite his aging and serious illness, he continues to be imprisoned. Mr. Ghaemi was arrested by the security authorities following the protests of Ashura 2009 and was first sentenced to execution on charge of Moharebeh and then to 15 years imprisonment.

According to the report of Human Rights Activists News Agency in Iran (HRANA), Hadi Ghaemi is among the detainees of Ashura 2009 who was sentenced to 15 years imprisonment in exile in Gonbad prison. After 5 years and due to his age and for medical treatment he was returned to Evin Prison in May 2015.

This political prisoner has been treated twice in an out of prison so far.

Mr. Ghaemi’s family has also requested a retrial, but this appeal has not yet reached a clear conclusion in Tehran’s court.

The political prisoner suffers from mental illness and diseases such as prostate cancer and hypertension, and despite the doctor’s diagnosis of his disability to serve his sentence; his request for parole or medical leave was rejected.

A source close to the family of Mr. Ghaemi told HRANA’s reporter: “Despite the age of this elderly prisoner, he had a serious operation for the prostate, and the cancerous gland was removed, but the surce has not yet been evacuated.”

It is worth reminding that due to the length of his imprisonment, he could receive parole, but until the moment of setting up this report, authorities in Evin Prison and judicial authorities have not given any assistance in releasing this prisoner.

Mr. Ghaemi who lives in the 70th decade of his life, was arrested several days after the protests of December 27, 2009, by the Ministry of Intelligence at his home, and was transferred to solitary confinement in Ward 209 of Evin Prison.

This political prisoner was exiled to Gonbad-e-Kavos prison in 2010, after being sentenced to 15 years imprisonment.

On Monday, September 6, 2010, when Mr. Ghaemi’s family went to visit room of Ward 350 of Evin Prison, he was informed that instead of having a visit, he would be exiled to Gonbad-e-Kavos, instead of the visit.