Human Rights Activists News Agency (HRANA) – Evin political prisoner Maryam Akbari Monfared wished her daughter a happy 13th birthday in letter she wrote from behind bars, where she has spent every one of her daughter’s birthdays for the past nine years.

Monfared, along with fellow prisoners of conscience Golrokh Ebrahimi Iraee and Atena Daemi, was recently punished with a three-week ban on family visits per verbal orders from the director of the Evin Prison Women’s Ward. All three were told they were being disciplined for protesting authorities’ attempts to unlawfully interrogate them this past September.

The full letter of Monafred’s letter to her daughter, translated into English by HRANA, is below:

In the middle of a cold, rainy December night, they tore you from my arms. You were only three and a half years old, and you had your arms locked around my neck. You were in a deep, angelic sleep.

Nine years have passed since then. All these years, I have celebrated your birthday in the prison visiting room. All my cellmates have shared in my joy. Every year, I prepared for your birthday days ahead of time, as best I could. I have watched you grow from the other side of the visiting room glass, and I drew lines on the concrete for every year that you grew.

While I was in prison you started school, and then you were no longer a little girl. And now, this year, you’re turning 13. We spoke about our wishes a week ago on the phone: you asked me whether you could come for a visit the following week, on your birthday. “Why wouldn’t you?!” I replied. “Of course you can!” Little did I know that our rare joys were being watched with malice from afar. 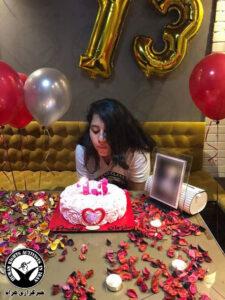 Before you arrived Wednesday, the Ward Director Ms. Abdolhamidi told me I’d been banned from visits for three weeks. When you came, you jumped into my arms and told me, ‘Mom, it’s my birthday next week! I’ll come to visit you and it will just be you and me.’”

It was more than I could bear to tell you that our visit next week would be canceled. My heart burned with anger and loathing for [the authorities], who would rob even the smile off your face. Flames of rage are still burning inside me.

Tomorrow is your birthday. I’ve been talking to my friends about it all day. I close my eyes and travel back in time to Iran Hospital, October 8th, 2005.

It is 6 a.m., and I am sitting in the hospital lobby. It is 10 days past your due date, but looking back now, it seems you were stalling your arrival in this world, that you foresaw that you would be targeted by the storms of life. But finally, you came, and your very first cries at 12 p.m. brought a smile to my face. I still feel your beautiful face and your first cry, and sense the sweet feeling of taking you into my arms for the first time.

I opened my eyes and there you were, a beautiful doll in a pistachio-green blanket with snowflakes on it. The delight of breastfeeding you, the joy of when you first opened your eyes; the first steps you took towards a beautiful life and future, and the music of your first word.

My dear Nazanin: I was not with you on your 13th birthday. I know that by now you understand why we’re apart. I know that you’ve suffered a lot these past nine years. Yet, we have promised each other to smile until smiles light the faces of all of Iran’s children. We promised each other to cherish our brief visits, for all of the times that we miss being together. We have pledged together to vanquish a monster.

My dear Sara: our future is bright. I hope for the daybreak whose first morning rays will be freedom, when I will tousle your hair and embrace you without the pain and the stress of knowing our visit could end the next moment. Let us laugh until daybreak […]

****
Maryam Akbari Monfared was arrested December 2009 during protests following Iran’s contentious election cycle of that year. In June 2010, Judge Salavati of Revolutionary Court Branch 15 sentenced her to 15 years in prison on the charge of “moharebeh” (enmity against God), on the premise that she was a member of the People’s Mujahedin of Iran (MEK). Monfared denied the charge.

Two of Monfared’s brothers were executed in 1981 and 1984 for membership in the MEK after being convicted in revolutionary courts. A younger brother and sister were also executed in 1988 as part of a mass execution of political prisoners.