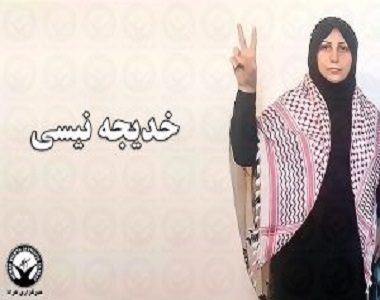 HRANA News Agency – Khadijeh Nisi was arrested by security forces after participating in the gathering of Ahwazi protesters to the events of the village of Jalisi Balla in the district of Dehloran in Ahwaz on Friday, December 8, 2017.

According to the report of Human Rights Activists News Agency in Iran (HRANA), the forces of the Ahvaz Intelligence Office arrested Khadijeh Nisi due to participating in the mass gathering of protesters against the events of the village of Jalizei Balla on Friday, December 8, 2017.

The protests of mostly Arab citizens in Ahwaz are in response to claims by the residents of the Arab village of Jalisi Balla in Dehloran based on the usurpation of their farmer lands by Army dependent ETEKA cooperative. Following the protests in the village, a number of people have already been wounded and arrested.

An informed source told HRANA’s reporter, “Khadijeh Nisi was arrested due to participating in the gathering and singing “Yazle” (a popular local music piece of southern Iran) in Arabic. No information is available on her fate after her arrest.”

It should be noted that on Tuesday, December 5, 2017, police forces wentto the village of Jalizei Balla in Moassan of Dehloran in Ilam province, by claiming the court ruling in the case of the disputed ownership of the agricultural land of this village in favor of the cooperative of army, and a large number of protesters were injured and arrested.