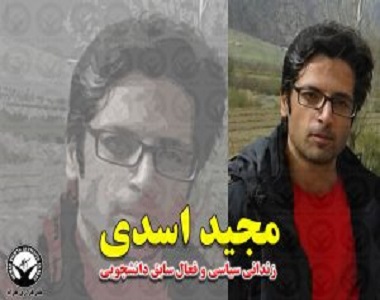 HRANA News Agency – Majid Asadi’s physical condition is reported to be inappropriate in Rajai Shahr prison in Karaj. The prisoner who suffered from acute inflammation of the spine and the digestive tract, was transferred to the court in a very bad situation on November 5, 2017.

According to the report of Human Rights Activists News Agency in Iran (HRANA), Majid Asadi has been suffering from continued nausea and pain in addition to a losing 8 kg weight in the last two weeks in Rajai Shahr prison in Karaj.

A source close to Majid Asadi told in a conversation with HRANA’s reporter: “Majid had suffered from acute inflammation of the spine. By the way, one of the vertebrae of the spine was deformed; practically, it was not really possible to work for this problem except controlling it and preventing the spread of the problem to other organs of the body, which is actually taking place in the opposite direction in Rajai Shahr prison in Karaj.

His family met him at the court on November 5, 2017, he was not well and all the symptoms of the spread of the disease were seen on him. Majid’s family asked the prosecutor to send Majid to the hospital.”

It should be recalled that Mr. Asadi was arrested at his home in Karaj by the Intelligence Ministry at 10 pm on February 18, 2017 and transferred to ward 209 of Evin Prison.

Security forces treated Mr. Asadi’s father violently and injured him, despite the illness and physical weakness of his father who had recently undergone a liver transplant in addition to insulting the mother of this prisoner.

Majid Asadi, Payam Shakiba and Mohammad Banazadeh Amirkhizi were exiled to Rajai Shahr prison in Karaj from ward 209 of Evin prison despite the prosecution of the case and the lack of clarity of the legal status on May 20, 2017.

The former student activist was arrested on July 8, 2008 at the July 8 anniversary and held in the solitary confinement for 52 days.

His verdict related to the case on July 8 was notified him in 2009 in which he was sentenced to 4 years imprisonment by Branch 15 of the Revolutionary Court, headed by Judge Salavati. He was summoned to the prison to serve his imprisonment despite appeals and notifying the final verdict, and he was imprisoned since October 5, 2011 to 2015.

Majid Asadi is graduate of economics from Allameh Tabataba’i University and member of the Central Council of the Islamic Association of the Faculty of Economics.

He who suffers from “acute inflammation of the spine and the digestive tract” is still deprived of proper treatment, and has not received his medication since being transferred to Rajai Shahr prison in Karaj.