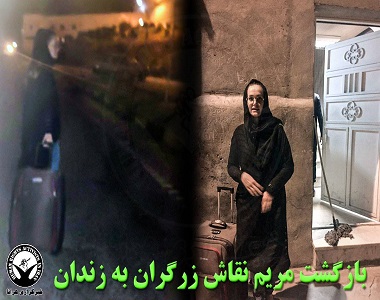 HRANA News Agency – On December 6, Maryam (Nasim) Naghash Zargaran, Christian convert returned to Evin prison by the end of her furlough and also 42 days has been added to her sentence because of her “absence”.

According to the report of Human Rights Activists News Agency (HRANA), Maryam Naghash Zargaran returned to women’s ward of Evin prison by the end of her furlough on December 6.

In the latest development of the case, 42 days has been added to her sentence because of her “absence”.

A close source to Naghash Zargaran family told HRANA’s reporter: “Maryam, who previously after a hunger strike was sent to medical leave, was said that ‘you would mind to be free until your probation demand becomes clear.’ After a while her parole was refused and she was called to return to prison. However, the time of furlough was considered as her absence so 42 days has been added to her sentence”.

It is worth noting, female political prisoners in the women’s ward of Evin prison gathered on November 25, International Day for the Elimination of Violence against Women. At the meeting Miss Zargaran spoke on the theme of “female genital mutilation and its continuation in some parts of the world and Iran as one of the forms of violence against women”.

Nasim Zargaran has been diagnosed with ASD and had a heart operation 9 years ago and needs constant medical care. She had gone on hunger strike several times to protest against her verdict and lack of medical care

Maryam (Nasim) Naghash Zargaran was summoned to the intelligence office for the first time in February 2011 and was interrogated. These interrogations which were accompanied by threatening and harassing her family members and happened in unofficial locations, continued around the subject of home churches.