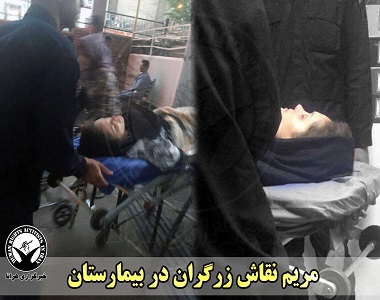 HRANA News Agency – Maryam (Nasim) Naghash Zargaran, political prisoner of women’s ward of Evin, was urgently taken to a hospital but was returned to prison without treatment in a state of unconsciousness on May 29, 2016.

According to the report of Human Rights Activists News Agency (HRANA), Maryam (Nasim) Naghash Zargaran, political prisoner of women’s ward of Evin prison, who has gone on hunger strike in protest to the lack of attention to her diseases, her case and opposition to her requests of parole and furlough since May 25, 2016, was urgently taken to a hospital but was returned to the prison without treatment in a state of unconsciousness on May 29, 2016.

A close to Zargaran family said to HRANA’s reporter: “Maryam could not get up from the bed since May 25, 2016 and her fever is very high.”

The source continued: “Maryam refused to go to visit following her protests on May 29, 2016. Following this action most of the others in the ward also refused to go to the visit in support of his appeal.”

This source added: “She is in a very serious physical condition. She had already lost 25 kg before the hunger strike and suffers from a new disease that causes extreme dizziness and headaches. She is not in a good mood. She has been depressed in the prison and consumes antidepressants. She has requested for retrial but recently her family were informed that there was not such a request in her case and she had to apply again.”