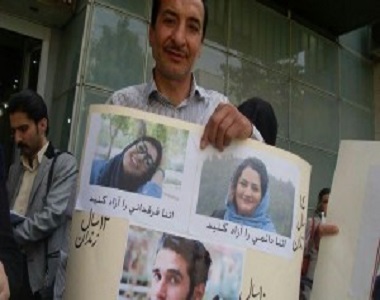 HRANA News Agency – The hearing of Mohammad Karimi at Branch 28 of the Revolutionary Court in Tehran was not held because of the absence of the judge on June 1, 2016.

According to the report of Human Rights Activists News Agency (HRANA), Mohammad Karimi, civil rights activist, referred to Branch 28 of the Revolutionary Court on June 1, 2016 after being summoned.

A source close to Mr. Karimi announced the news and said to HRANA’s reporter: “On June 1, 2016, Mr. Karimi, referred to Branch 28 of the Revolutionary Court and after four hours of waiting for the hearing, they told him that Judge Moghiseh was not there and the hearing was not going to be held.”

The activist has been charged with “acting against national security”.

HRANA had reported previously that Mohammad Karimi had been arrested in the alley leading to his house, on Tuesday October 5, 2015. According to the report, agents seized the house key and without coordination with the family, entered and proceeded inspection and took his belongings. The way of his arrest had been reported to be “brutal”.

After being under detention for 25 days in solitary confinement in ward 209 of Evin prison, he was transferred to the public ward of the prison.

On November 18, 2015, Mohammad Karimi was released on the bail of 2 billion IRR.

Mr. Karimi was one of active participants in civic and peaceful assemblies in Tehran, including gatherings in front of the building of Dena Tire and the Bar Association.