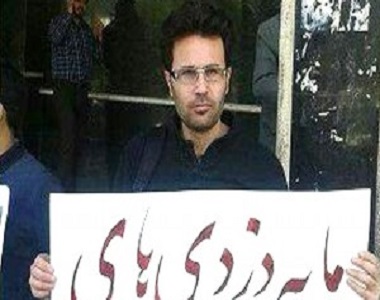 According to the report of Human Rights Activists News Agency in Iran (HRANA), about four months ago, he was arrested at a sit-in in front of Evin prison and was sentenced to 91 days imprisonment and 74 suspended lashes in branch 1060, by Judge Farshid Dehghan on charge of “disturbing the public order through turbulence”.

Judge Farshid Dehghan sentenced Mohsen Shojae to 91 days imprisonment and 74 suspended lashes. This civil rights activist had introduced himself to Evin prison to endure his 91-day sentence, by deducting about a month of temporary detention, he was released temporarily by the approval of the head of the enforcement branch. He must introduce himself to Evin prison on April 3, 2016.

Mohsen Shoja also has an open case pending concerning his arrest last year. About the legal status of this open case Mr. Shoja has told the HRANA’s reporter: “I was arrested because of the sit-in with Mr. Nourizad in order to get his personal belongings back, and I was charged with four charges of “Disturbing the Public Order”, “Acting Against the National Security”, “Insulting the Supreme Leader”, and “Propaganda Against the Regime”. These were communicated to me by Amin Nasseri, the prosecutor of Branch 6 of the Shahid Moghadas court in Evin prison. I was released on a bail after 10 days, and no trial has been held for this case yet.”

It’s worth mentioning, on Wednesday September 3, 2014, Mr. shoja was arrested at Taleghani St. in front of the former USA embassy, after a meeting with Mohammad Nourizad, artist, critic, and civil rights activist and on Monday September 13, 2014 he was released on a 50-Million-Thomans bail.