A Number of Detainees Released from Khoy Prison 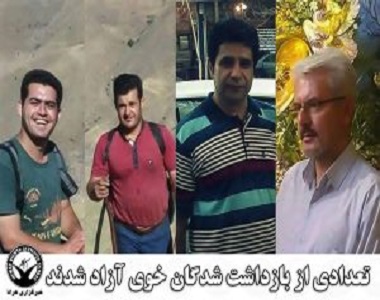 HRANA News Agency – On Saturday, January 27, 2018, a number of detainees of the recent protests in Khoy, including Shahriar Galawani, Abbas Kuchari, Majid Mohammadi and Mohammad Abazari, were released on the bail until the trial.

According to the report of Human Rights Activists News Agency in Iran (HRANA), on Saturday, January 27, 2018, a number of detainees in Khoy, were released on the bail until the trial.

Milad Hajilo was another activist who was not released, despite putting a bail of 2 billion IRR.

Shahriar Galawani is a well-known cultural figure, author and translator in Khoy, who was arrested on Thursday, January 4, 2018 by security forces.

Abbas Kuchari, another activist from Khoy, calligrapher, was arrested on Thursday, January 1, 2018.

It is reported that several activists from Khoy have been released along with these individuals, but there are still a number of detainees in the quarantine of prison in Khoy.

It should be recalled that a large number of people were arrested and interrogated in various cities in the recent protests.

During these protests, at least 25 people were killed across Iran, according to official sources, the protests were held in more than 80 cities and about 3,700 people were arrested.

Some of the detainees were released on the bail until the trial, and some have been transferred to jail.