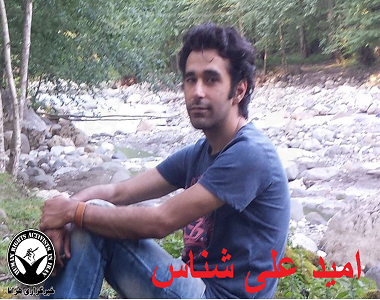 According to the report of Human Rights News Agency in Iran (HRANA), on March 20, 2017, Omid Alishenas civil activist, was sent to a 6-day furlough.

It should be noted that Omid Alishenas had been arrested on September 4, 2014, and was transferred to ward 2-A of the IRGC and although a bail of 100 million IRR had been issued, the prosecutor refused to accept the bail for unknown reasons. He had been transferred to Evin prison at the end of the interrogations.

This activist was released on the bail from Evin prison, after sixteen months of imprisonment on January 18, 2016.

Mr. Alishenas had been sentenced to 10 years imprisonment by the primitive court, presided by judge Moghiseh, and the sentence was reduced to 7 years on the appeal court.

In Branch 36 of the Tehran Appeals Court, the sentences of four civil activists; Atena Daemi, Omid Alishenas, Asuo Rostami and Ali Noori, respectively 14, 10, 7 and 7 years imprisonment, were reduced to 7, 7, 2 and 2 years imprisonment.

The civil activist, was arrested by the Sarallah Guards’ agents and was transferred to Evin prison to serve his 7 years imprisonment sentence.