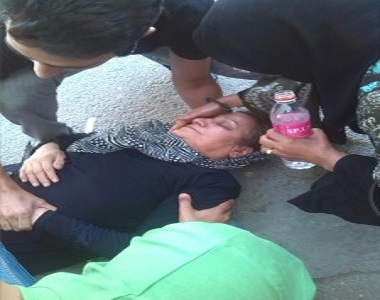 HRANA News Agency – The families of the political prisoners of ward 350 of Evin Prison could visit them on Monday April 21st.

According to the report of Human Rights Activists News Agency (HRANA), Monday April 21st was the regular weekly day of the prison visit of the political prisoners of ward 350.

There were the families of the prisoners and others who went there in solidarity with political prisoners.

The witnesses say there were security forces and a van with a cage in it in front of the visiting hall of the Evin prison.

The families who could visit their loved ones have reported injuries and bruising on the bodies of the prisoners.

Akbar Amini’s neck and head has been broken and his mother passed out when she saw him and was transferred to a hospital.

20 political prisoners who are kept in solitary confinements of ward 240 and are more injured were allowed to meet only one member of their families and for 5 minutes after 2 p.m.

One the participants told HRANA: “We want to demonstrate in front of the presidential office on Thursday and ask the president to take care of our loved ones.”

According to the last reports from ward 350, 12 prisoners are on hunger strike in this ward now.