Shirzad’s post-incarceration charges document a battle against the prisoner abuse for which Rahai Shahr has come to be known.

According to an informed source, the Judiciary is punishing Shirzad for recent defiances by enforcing a one-year suspended sentence that was issued to him back in 2012 for his relief work with earthquake victims in the East Azerbaijan province.

Among Shirzad’s defiances that have irked authorities is the hunger strike he staged with fellow prisoners Saeed Masouri, Amir Ghaziani, Abolghasem Foloudvand, Reza Akbari Manfarand, Hassan Sadeghi, Pirouz Mansouri and Jafar Eghdami. Without a judicial order, all of the striking prisoners were unlawfully transferred to solitary confinement.

Shirzad also incurred penalties in the tense atmosphere surrounding the July 30, 2017 joint decision between security organs and the Rajai Shahr administration to move political prisoners to a higher-security ward. Authorities charged Shirzad with insulting the supreme leader and disturbing prison order for the active role he played in protests against the transfer.

Quickly thereafter, along with fellow prisoners Amir Ghaziani, Saeed Pourheidar, and Ebrahmi Firouzi, Shirzad was charged with destroying public (i.e. prison) property, a charge for which authorities set a bail of 70 million tomans (approximately $1700 USD). In an additional punitive measure for his protest activity, Shirzad was banned from receiving family visits for a period of 8 months on orders from the head of the prison.

To construct a pretext for the unlawful transfer, HRANA’s source said, prison administrators had already levelled bogus accusations at the prisoners, which with judiciary cooperation have been escalated to active case files. The prisoners involved are now weighed down with additional convictions like “chanting slogans against the supreme leader” and “insulting prison authorities.”

Yet another indicator of the friction between Shirzad and prison authorities is his rapidly declining physical condition. The most recent of Shirzad’s multiple hunger-strike protests lasted more than 50 days, costing him considerable physical strength and almost 40 pounds of body weight. Recently, a sonography identified a newly-developed kidney cyst — of which Shirzad had no prior medical history — as the source of his chronic pain.

Prison authorities have also left on Shirzad the marks of corporal punishment. Beatings — particularly after his protesting of the forced transfer, and most often from Former Prison Head Mohammad Mardani — have brought about back spasms and disc disease requiring bed rest and physical therapy. As of the date of this report, however, prison authorities continue to withhold his prescribed treatments.

Shirzad is a political activist who was arrested in 2014 at the Tabriz oil refinery where he used to work. Due to multiple postponements of his court date, he was also subject to a judicial lag of 15 months between his June 2014 arrest and September 2015 trial in Tehran Revolutionary Court Branch 15, presided by Judge Salavati. During that period he was detained without a conviction first in Evin, and then in Rajai Shahr Prison.

On April 15th, 2017 — a year and half after his already-delayed initial trial — his appeals session convened in Branch 54 of Tehran Appeals Court and ultimately ruled to uphold his 5-year prison sentence.

Prior to his current incarceration, Shirzad was convicted of gathering and collusion for his contacts with the families of prisoners deemed by authorities to be “anti-regime.” A source familiar with that case file elaborated to HRANA that “Shirzad’s assistance to those prisoners’ families — some of whom were loyalists of the People’s Mujahedin of Iran [MEK] — especially in tutoring their children, was the grounds for accusing him.”

The source added that Shirzad has also been pursued on charges of disturbing public order and espionage. His protests in front of the Tehran municipality against the killing of a peddler in the Tehran metro — along with his ties to a former United Nations human rights reporter — were deemed sufficient evidence to convict him on those charges on May 31, 201 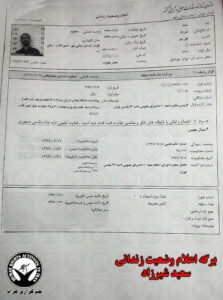 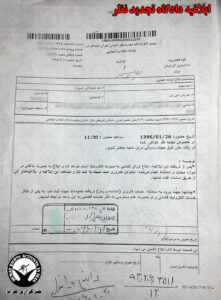 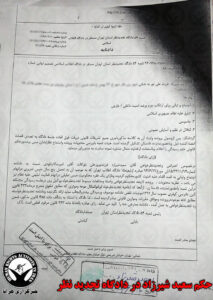