A Reported about the an Imprisoned Couple 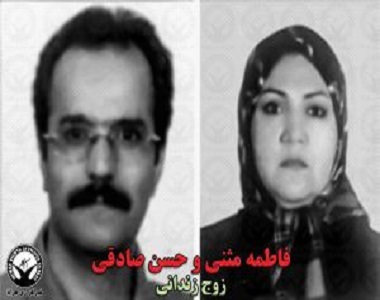 HRANA News Agency – Hassan Sadeghi and Fateme Mosana, the imprisoned couple in the prisons of Rajai Shahr and Evin, were arrested in February 2012 due to holding the funeral ceremony for Mr. Sadeghi’s father, who was an opponent of the Iranian government and was arrested with his two children, 16 and 11 years old, and his house was sealed.

According to the report of Human Rights Activists News Agency in Iran (HRANA), Fateme Mosana is in women’s ward of Evin Prison and her husband, Hassan Sadeghi is in Rajai Shahr prison in Karaj, serving their 15-year-imprisonment sentence.

Hassan Sadeghi, political prisoner in Rajaee Shahr prison in Karaj, is serving his sentence in exile while his wife, Fateme Mosana is also being held in the women’s ward of Evin Prison. Previously, the couple were tried by Judge Pir Abbas and after his dismissal in court, they had been sentenced to 15 years in prison by Judge Ahmadzadeh and their two children were left without guardian.

The estate of this family, including Mr. Sadeghi’s business place and house had been confiscated. Mr. Sadeghi had been arrested at the age of sixteen in 1980s and was released after six years in prison. He was beaten up and lashed during the arrest.

These collisions were somewhat progressed that it was reported that “he was anesthetized once and returned to normal state after one hour due to the severity of the blows.” He was transferred to ward 350 of Evin after four months and a half of being in solitary. Then he was released on the bail from prison until the trial was held.

The Glaucoma Eye was diagnosed by experts with the onset of Mr. Sadeghi’s treatment. Mr. Sadeghi had not yet completed his medical examination that he was arrested without the summons during visiting his wife in Evin Prison to serve his sentence in February 2009. After being arrested, he spent one week in the quarantine of Evin without having his medicine, and was exiled to Rajai Shahr prison in Karaj.

Fateme Mosana also suffered the fracture from the leg during serving her sentence and her injuries and pain did not heal due to the lack of timely treatment and prolonged interruptions during the physiotherapy prescribed by the specialist physician.