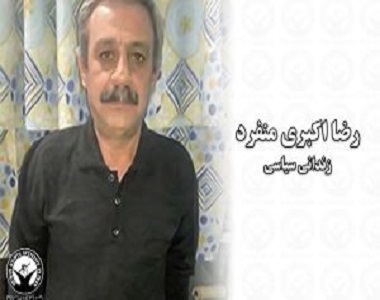 HRANA News Agency – Reza Akbari Monfared, political prisoner who had been sentenced to 5 years and 6 months imprisonment on charge of supporting the MEK, was released from RajaI Shahr prison, in Karaj at the end of his sentence.

According to the report of Human Rights Activist News Agency in Iran (HRANA), Reza Akbari Monfared has been released from Rajai Shahr prison in Kara, at the end of his sentence of 5 years and 6 months imprisonment.

Mr. Akbari Monfared served his conviction while he was not sent furlough during all years of imprisonment.

This political activist was arrested on charge of sympathizing with the MEK in his own house, on January 15, 2013.

He was sentenced by the Revolutionary Court to five years and six months imprisonment. His sister Maryam Akbari Monfared is also being held in the women’s ward of Evin Prison. He also had a history of detention in the 1980s, and four of his family members, Alireza, 20, Gholamreza, 26, were executed in 1981 and 1985, as well as Raghieh, 30, and Abdolreza, 23, in the massacre of political prisoners in 1988.

This prisoner was banished in August 2014, along with six other prisoners, from Evin prison to Rajai Shahr prison, in Karaj.

Reza Akbari Monfared, political prisoner detained in Rajai Shahr prison, in Karaj, who recently terminated his hunger strike after about 40 days, along with a group of prisoners, protesting the inhumane conditions, by writing a letter to the UN Special Rapporteur on Human Rights spoke of increasing pressure on him and other prisoners who were particularly involved in this protest. He described examples of this increased pressure in this letter, such as the prohibition of visits, the restrictions on communications, the limitation of access to food and the denial of prisoners’ access to medical services.