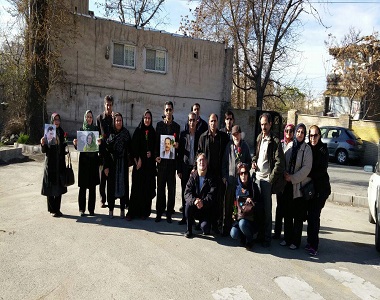 According to the report of Human Rights Activists News Agency in Iran (HRANA), a group of civil society activists, including supporters of “Mohammad Ali Taheri” and relatives of political prisoners who were not sent to the so-called Nowruz furlough, had a sit in in front of Evin prison to begin the new year close to their beloved ones, but some people, including the father of Athena Farghadani and Dr. Farhad Maysami were beaten by the security forces.

Mohammad Nourizad as a member of the audience on stage in this regard, said “Today in front Evin, 15 plainclothes officers were very impatient. I and Dr. Maleki were in front of the entrance gate of Evin prison and our friends were downward and the officers did not allow them to enter. It was approximately 8 am, when I and Dr. Maleki went down and saw that one of the officers drove our friends by beating, slapped the father of Athena Farghadani and beat a young man so much that the young man rolled on the ground. And then went towards Dr. Farhad Maysami and push him and kicked him and beat him.”

It should be noted that a large number of political prisoners in the prisons of country were not sent to New Year furlough.