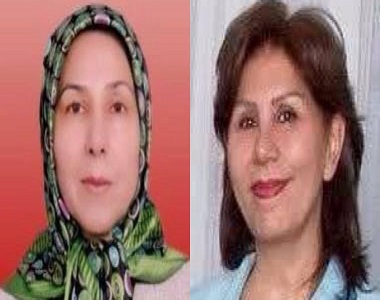 According to the report of Human Rights Activists News Agency in Iran (HRANA), these two prisoners were sent to Tajrish hospital for «MRI» scan, on Saturday 1st August.

One of those close to them has written that by waiting for 6 hours in handcuffs, aggravated their pain so that they still suffer from wrist pain.

Sedigheh Moradi was arrested in Tehran and was transferred to Evin prison in Tehran, on 1st May 2011, and on charges of combat and connection with opposition groups, was sentenced to 10 years imprisonment and exile to Rajai Shahr prison by Branch 28 of the Revolutionary Court in Tehran, presided by Judge Mohammed Moghiseh. The sentence was confirmed by the appeals court identically. This prisoner who had also been arrested in the 1980s, was held in ward 209 after being arrested for 7 months and in December 2011, was transferred to the general ward.

Mahvash Shahriari is one of the 7 Baha’i leaders who were arrested in March 2007. She spent 6 months in solitary confinement and at that time had got heart disease. After 2 years of uncertainty and being held in ward 209, last year she was sentenced to 20 years imprisonment by the court that the verdict was confirmed by the appeals court. This Baha’i citizen has been imprisoned in women’s wards in all prisons of Mashhad Intelligence, ward 209 of Evin, Rajai Shahr, and Gharchake Varamin.