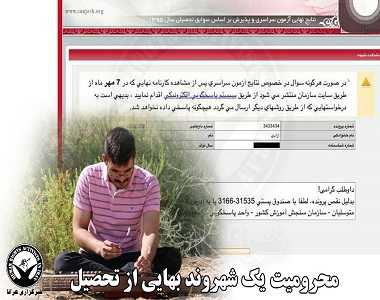 HRANA News Agency – Like every year along with the results of exams to enter the universities, there are some reports indicating exclusion of Baha’is from higher education due to their religious beliefs. Seraj Azadi, young Baha’i resident of Abadan, is one of the most recent examples of this exclusion and has been prohibited from continuing his education.

According to the report of Human Rights Activists News Agency in Iran (HRANA), Seraj Azadi, born in 1998, a Baha’i resident of Abadan faced with “defect in application”, like many other Baha’i students, after the announcement of exam results of national tests and so the opportunity to enroll and continue his education has been taken away from him.

“Defect in Application” is an excuse that is usually being used by the Educational Testing Organisation to deprive Baha’is of higher education.

According to a confidential resolution of the Supreme Council of Cultural Revolution of Islamic Republic of Iran, Baha’is, in addition to exclusion from employment in public places, are deprived of university education.