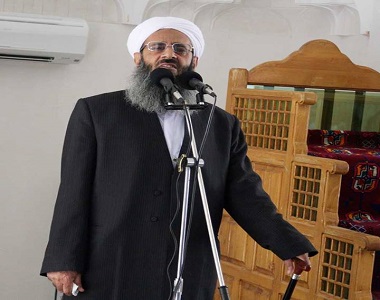 HARANA News Agency – In a letter, eighty political prisoners in Rajai Shahr prison condemned the recent banning of Maulana Abdulhamid Esmailzehi, the Sunni Imam of Zahedan’s mosque. Maulana Abdulhamid was planning to participate in the international conference of “Islamic scholars to institutionalize peace, moderation and good sense” in Turkey.

The following is a full text of this letter, a copy of which has been submitted to HRANA:

“We, the Sunni prisoners of the Rajai Shahr prison strongly condemn the recent banning of Maulana Abdulhamid Esmailzehi’s travel to participate in the international conference in Turkey by the security forces of Iranian regime. We believe this is in continuation of violating ethnic and religious minorities’ rights, in particular the Sunni community, in Iran. This is a well-established fact because while Maulana Abdulhamid is banned from attending this conference, a number of other Iranian religious and political personas have participated in the same conference. The obvious reason behind this unjust act is Iranian government’s fear of Maulana Abdulhamid highlighting the level of oppression and tyranny that the Sunnis are facing in Iran. The regime fears that its real face of cruelty, which is hidden behind the fake mask of “religious unity”, to be exposed, and the international community find out about what is going on in Iran. This mask is critical for the regime to continue suppression and violation of Sunnis’ rights.

The Iranian regime’s tyrannical act of suppression is not only limited to these limitations. Over the last 35 years, the regime has been persistent on economical suppression, creating tight limitations for Sunni clergies and scholars, preventing job opportunities for young Sunni work force, and facilitating drugs and prostitution in Sunni communities inside Iran. These are only examples of Iranian regime’s oppression and intense control over Sunni regions in Iran.  Another example of these brutal activities is execution and imprisonment of many Sunni religious advocates in Kurdistan. There are currently more than 80 Sunni prisoners in Rajai Shahr prison who are facing brutal sentences including execution. Four of these prisoners have been recently transferred to Ghezel Hesar prison to execute the death sentence. Although these four individuals have been more than 35 days in hunger strike, the judicial authorities have paid no attention to their requests and improving their constantly deteriorating conditions.

Therefore we, the religious and ideological prisoners of Rajai Shahr prison, condemn the illegal limitations imposed on the Sunni scholars and citizens by Iranian regime. We ask the international political and religious personalities and organizations to monitor the increasingly worrying pressure of Iranian government on our scholars and religious advocates.”