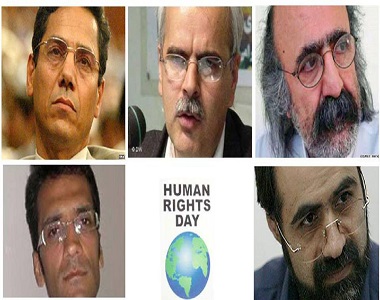 We are honouring the 66th anniversary of compilation of International Human Rights Declaration while we are observing the systematic violation of Human Rights by official and unofficial organisations supported by the government in our beloved country.

These days are in coincide with the 16th month of Rohani’s government, which has brought considerate hope in addition to being renown as widely supported by people. During this period we have witnessed relative efforts of the government to improve the situation in some domains (such as: government support of anti-filtering on social networking, support for the return of former professors and students expelled from universities, compilation of the charter draft of citizenship rights, attempts to improve the environmental conditions and approval of the executive bill of free access to information. Unfortunately due to format of power and jurisdiction in the Islamic Republic and asymmetric concentrating of the majority of power in non-elective and non- responsive organisations , the increasing process of human rights violation is such that one cannot stay hopeful to constancy of this limited achievements.

Breaches of fair trial standards and procedures , increasing statistics of heavy and unjust sentences including death sentences, failure to implement parts of the Penal Code which will lead to the release of many prisoners (such as the above-mentioned Article 134) and also delays in implementation of the law of Criminal Code , are among the major human rights violations that occurs in the area of ​​judicial affairs.Unfortunately in the domain of Law, by approving various acts and consideration of projects such as “support for those responsible for Enjoining good and forbidding wrong” grounds for aggravated, systematic and official violence and limitation for social freedoms is being provided by non-elective and non- responsive organisations which are supported by some sections of the government.  Dismissal of the convention of “banning all types of discrimination against women”  and  dismissal of the suggested supportive plans aiming to  preventing violence against women and children , have resulted in the development of discrimination and inequality amongst the women in the country. In addition, it is important to point out the approval and enforcing Articles in the Islamic Penal Law (2013)   (including Articles , 220, 286, 291, 292, 302, 303, 349), whereby judges can use little excuse to sentence political and conscious opponents with  death penalty . Also, based on the other to sentence of mentioned law, any citizen can commit murder using flimsy excuses and be safe from the punishment. The above examples are only a part of systematic violations of human rights in the current legislation.

In the midst of this, the executive part of the 11th government, despite the promises given to people during the election campaign, still struggling with various issues and is under difficult evaluations for their given promises by public opinion.  Partial failure in implementation of Constitution, especially the section about the rights of nation because of the ongoing security approach of the government toward the political and societal issues of the country;ongoing illegal incarceration of the leaders of the Green Movement : Mr Mirhossien Mousavi, Mrs Zahra Rahnavard and Mr Mehdi Karoubi; unfair and inadequate distributing of wealth has resulted in further poverty ,inequality and widening gap among the classes of the society.  Also absence of job security especially among the low income sector of the society such as labours and staffs are examples from the mentioned issues.

Although in the domain of health and hygiene, injecting part of the Oil industry’s income resulted in temporary improvement for citizens’ health , the System of Hygiene , Treatment and Public Health is not in an acceptable and sustainable condition and we are facing  a  widespread of dangerous disease such as Cancer , Cardiovascular and Respiratory disease.

It is also important to point out the important social policies which reduced social capacity and increased the violence among the stratum of the society. Example would be the increasing violence and attacks on women in Isfahan and Jahrom which put the society in an unsafe and hazardous situation.

In such situation, we are unbelievably facing the responsible authorities claims of “satisfactory human rights condition in Iran” and “adequate transparency” on such issues.

Based on these claims we are also facing the prevention of the presence of the United Nations Special Rapporteur for Human Rights in Iran for the 4th consecutive year.

In the end , as well as expressing our concerns about the ongoing systematic violation of human rights in Iran and extremely unsafe  and unamendable damages to the Iranian society , we request that authorities work towards and take effective steps on all aspects of this domain ; cooperate with the civil society and to enforce the international suggestions and conventions to improve the situation of human rights in Iran .